The history of Vikings is long and complicated. Originally living peacefully in their ancestral home, a changing landscape forced them to adapt, and spin off into new territories.

Now, I am not talking about the long history of the Viking people, but the distribution saga of the 2013 drama series.

Originally airing on the History channel, Vikings eventually found a streaming home on Prime Video, releasing the second half of its sixth season ahead of its cable premiere. Now, nearly nine years after the original saga’s debut, it has spawned a spinoff — Vikings: Valhalla, on Netflix. And it stands as the latest victim in the war for IP that has left parent shows and their spinoffs separated between streamers by complicated licensing agreements (looking at you, Yellowstone and 1883).

And yet, despite its new home, Vikings: Valhalla has plenty of callbacks to the original series that will please the old gods. Kattegat still plays a central role in the drama, and names such as Ragnar Lothbrok, Lagertha, Bjorn Ironside and Ivar the Boneless are referenced with the reverence and respect they deserve. But much has changed in the 100 years since Ragnar’s rule, with new kings, warriors and gods now filling Kattegat’s halls.

A NEW KING AROSE OVER ENGLAND WHO KNEW NOT RAGNOR | But Vikings: Valhalla actually begins in England, in the Viking settlement of the Danelaw, with the pagans-turned-Christians celebrating St. Brice’s Day and sending Harald Sigurdsson (played by Leo Suter) back to Norway, the ancestral home of the Vikings. As he departs, his older brother Sten is called to the palace of King Æthelred II (The Borgias’ Bosco Hogan) on an urgent matter. This, however, turns out to be a trap, as the king — fearful over the Viking’s growing numbers and facing pressure from his nobles — exterminates all the Vikings living in the Danelaw, Sten included.

One year later, King Canute of Denmark (Bradley Freegard) calls upon all Vikings from across Norway and its settlements to form a great army and seek revenge on the English. However, a great storm off the coast of Kattegat weakens the numbers of the great army by destroying all of that day’s incoming ships — that is, all except one.

Vikings stars @alexanderludwig @KatherynWinnick and @alex_h_andersen send their love — plus a bit of advice — to the cast of Vikings: Valhalla, now on Netflix pic.twitter.com/VbhxUxCJEH

THE GREENLANDERS | Thanks to his quick thinking and captaining skills, Leif Erikson (Chilling Adventures of Sabrina’s Sam Corlett) is able to steer his ship through the great storm from his home in Greenland, saving the lives of his comrades and his sister, Freydis Eriksdotter (Frida Gustavsson).

Leif goes off to explore Kattegat, which has grown exponentially since the days of Ragnar and Bjorn, including the addition of a new sea gate. Also new to Kattegat: Christian Vikings, who now match if not surpass the population of those who worship Odin and the old gods. 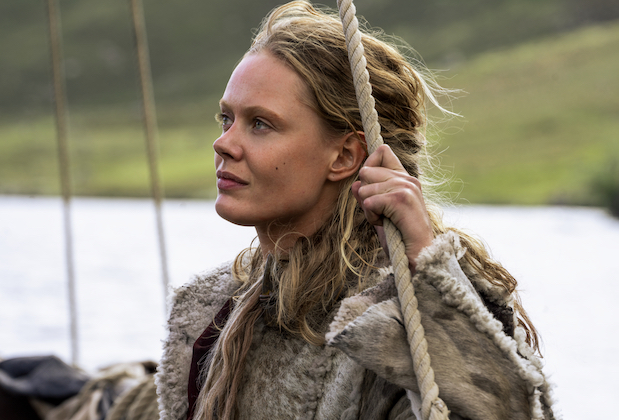 Meanwhile, Freydis runs into and sleeps with Harald, who reveals himself as the great-grandson of Harald “Finehair” Halfdansson. (“I don’t know who that is,” Freydis uncaringly responds when Harald gives her the “big” news, in a line reading that would undoubtedly make poor, old Finehair roll in his grave.) Freydis, in turn, reveals to him that she and her brother are not there to help the great army but are seeking revenge against the Christian Viking who raped and branded her with a cross.

Back on the docks, Leif and Freydis spot the ship of Jarl Olaf Haraldsson (Jóhannes Haukur Jóhannesson), the Christian half-brother of Harald, and seemingly identify him as her rapist. They follow him to the main army’s camp but discover that getting to him will be more difficult than initially anticipated. Olaf built the defenses around London back when the Vikings and English were allies, making him indispensable to the Viking army and heavily protected.

CHRISTIAN VS. PAGANS | Olaf is well aware of his value to the Viking army, hoping to use it to further his religious agenda. Refusing to fight with pagans, he declares that he will only assist the great army if a mass conversion of all the worshippers of the old gods takes place. However, King Canute is quick to shut that proposal down, understanding that, were he to allow it, it would cause a massive civil war among his own ranks. 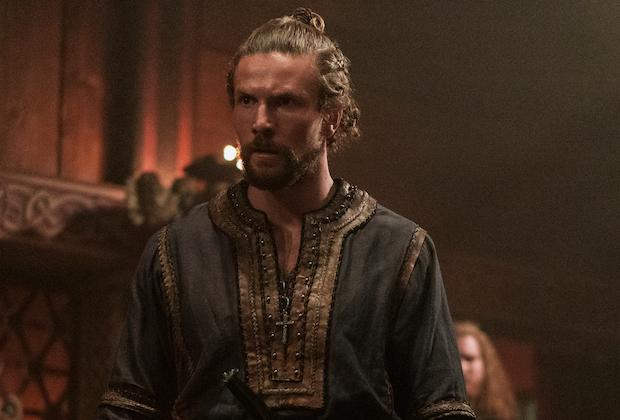 But Olaf is not the only valuable member of the new army. Harald, too, proves his worth by convincing his half-brother to join the fight by reminding him of all the gold and riches he can earn while in England. And later that evening, as King Canute rallies his troops, the young warrior stops a duel between leaders of the Christian and pagan factions, reminding them that they all bleed the same Viking blood.

SINS OF THE FATHER | Leif infiltrates the army camp to try and get close to Olaf but is interrupted when some men seeking revenge against his father for killing their brother attack him. He, however, proves to be a formidable warrior, defeating several Vikings without killing them. Harald witnesses this great feat and tries to recruit Leif for his cause, but Leif is uninterested in the “glory” Harald promises.

While waiting for Leif to return, Freydis runs into Jarl Hakkon (Caroline Henderson), the new ruler of Kattegat and friend of Freydis and Leif’s father, while praying to the old gods. The jarl warns Freydis that the old ways are no longer tolerated much in Norway and that Kattegat is one of the few safe refuges for people like them.

The great army departs for Kattegat to rest and replenish before leaving for England. Freydis and Leif reconnect in the Great Hall as the army feasts and readies to exact their revenge against the Christian rapist. However, the culprit turns out not to be Olaf but his lieutenant, Gunnar. As Leif distracts Harald, Freydis stabs Gunnar and carves a cross in his chest. Furious, Olaf leaps to kill Freydis but is quickly disarmed by Jarl Hakkon, who reminds him whose house he is in. Freydis claims that she was in her right to kill him for the crimes he committed against her, with Harald coming to her defense and begging her to show everyone her scars. Freydis does so, shocking even Olaf, and Jarl Hakkon announces that she will render judgment in the morning.

In the meantime, it’s your turn to render judgment. What did you think of the premiere? Grade it via the poll below, then hit the comments!