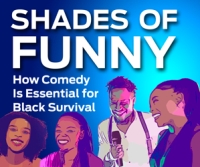 Getting fired from Good Times is one of the best things that could have ever happened to John Amos.

After three seasons of fighting with executive producer Norman Lear and the CBS sitcom’s white writers about the stereotypical Black portrayals and dialogue the show perpetuated, particularly when it came to star Jimmie Walker, Amos’ contract to play patriarch James Evans wasn’t renewed at the end of Season 3 in 1976 and his character was killed off.

Fascinatingly enough, Good Times Season 4B premiered mere weeks before the Roots miniseries debuted in January 1977 on competing network ABC and changed television as we know it forever because of the grippingly personalized way it portrayed enslaved Black Americans. Looking back on both experiences, just before Black History Month comes to a close, Amos says he’s proud he was a part of both small-screen offerings because their historical impacts can still be felt today.

“The truth of it is, when I started acting, I never thought I would live this long, much less be an actor,” the 82-year-old tells TVLine with a chuckle. “I’ve had a blessed career, and I attribute that to my faith in God and the fact that I was raised right. I had the chance to portray a father on a situational comedy that so many Black fathers and men of all races could identify with and appreciate.” 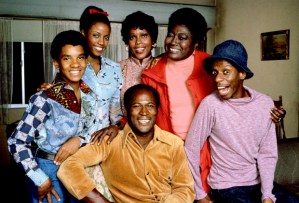 Amos adds that “up until that point, there had never been a complete Black family portrayed on television. And with Roots, I don’t think any of us involved in the production, particularly the network, were aware audiences would tune in to the extent that they did.”

Roots, inspired by late author Alex Haley’s novel of the same name, drew a record 36.4 million viewers and remains one of the most watched television events of all time. In that way, Amos observes, Good Times and Roots had more in common than him.

“America and the world got to see what life could be like within a Black family on Good Times,” Amos shares. “It was the sort of family white viewers had read about in their own magazines with their slanted perceptions. But Good Times corrected that imagery with its crazy teenage kids, a studious son Michael, as portrayed by Ralph Carter, and a beautiful young daughter with unlimited mental potential, as portrayed by BernNadette Stanis as Thelma.” 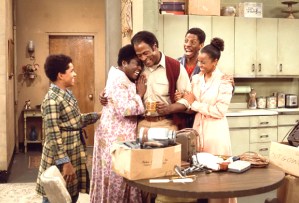 While Amos doesn’t mention Walker or his character JJ, his fond recollections do include the late Esther Rolle. She played his wife, matriarch Florida Evans, despite being 20 years his senior in real life.

“Florida was the glue that kept the family together,” Amos joyfully recalls. “It showed a Black family that had the same trials and tribulations as the rest of America, especially those who were financially challenged. Good Times was a form of Roots, except it told the story of who we are on a comedic basis. And I’ve always contended, as some of my mentors taught me, the best way to get a message across to people is through humor.”

The acting veteran, whose credits also include Future Cop, Die Hard 2 and Two and a Half Men, says he feels relieved and proud that modern sitcoms such as black-ish, The Neighborhood and The Last O.G. (on which he guest-starred) have Black writers and showrunners. But Amos adds that he wants the course correction to keep going.

“I hope that this phenomenon continues until we are totally in absolute control of our own imagery,” the Newark, New Jersey native divulges while comparing Good Times to its television descendants.

“When you allow other people to perpetuate your imagery, they will do so out of their own perceptions and minds, and it’s not always an accurate view,” he continues. “It seldomly is. I had innumerable arguments with the writers on the set in regards to my character’s demeanor, or what he would say in certain given situations. It was too often for Norman and the other writers to accept. We have a low bulls–t threshold in New Jersey. So when I was being fed a line that was bulls–t, I wasn’t apprehensive at all about saying, ‘Uh-uh. This is not gonna work.’ I just didn’t do it in the most diplomatic terms.” 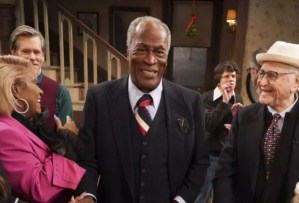 Amos and Lear have since made amends, and Amos appeared in Lear’s 2019 special Live in Front of a Studio Audience: All in the Family and Good Times. He also adds that two of his favorite comedians — Eddie Murphy and Dave Chappelle — are able to use humor to communicate in a way he wishes he could have at their age. Amos worked with Murphy on the 1988 classic Coming to America, in which he played Cleo McDowell, a businessman who owned a fast-food restaurant that too hilariously and closely resembled McDonald’s. The movie also reunited him with his Roots costar, the late Madge Sinclair, who played Bell, the wife of his character, adult Kunta Kinte.

“Dave Chappelle gets his message across but doesn’t offend people who don’t need to be offended,” Amos opines. “Some folks need bracing, as my uncle used to say. To work with Eddie Murphy on Coming to America was a paid vacation for me because I’m an Eddie Murphy fan. I’m an Eddie Murphy fanatic. I love everything he does, and to work with him day after day, for such an extended period of time, was a blessing. I reflect back on that with very, very fond memories.” 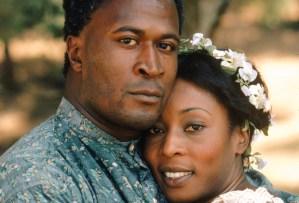 One of Amos’ favorite moments from the movie is when he ad-libbed the line, “I don’t give a damn who you are. This is America, Jack. Now you say one more word about Lisa, and I’ll break my foot off in your royal ass.”

“I have to take credit for that. I ad-libbed quite a bit, and John Landis, the director, was very receptive to my ad-libs,” Amos concludes proudly. “I initially ad-libbed the line at a reading of the script, and when Eddie Murphy dropped the script, hollered, and released that signature laugh that he has, I knew my line had gotten the laughing approval of a master comedian.”

What’s your favorite John Amos role? Drop your thoughts in the comments — and click here to check out all of our special “Shades of Funny” coverage dedicated to Black comedy trailblazers and rising stars.