Returning from its holiday hiatus Thursday, Station 19 not only resolved at least the first part of Grey’s Anatomy’s midseason-finale cliffhanger, it dealt Sullivan the break for which he’d been angling but in a way he never would’ve wanted, and dropped the mother of all shocks on poor Vic. And if you read on, we’ll go over all the deets…

‘I SEE GOO’ | Early on in “Started From the Bottom,” we met McAllister’s replacement, Natasha Ross (Greenleaf vet Merle Dandrige), an ex-Marine who knew Sullivan 15 years ago in San Diego. (How well-acquainted “Tasha” and “Sully” were remained unclear.) Quickly, the new chief established herself as no-nonsense and as transparent as a freshly washed window pane. Aside from breaking up the old boys club that McAllister had made of the SFD, her first order of business was to green-light the health clinic that Ben, Jack and Carina had pitched. “You can celebrate,” she told Warren and Gibson. But they didn’t much feel like doing so, given that the city was offering only about a fifth of the money they’d need.

After most of the firefighters were called away to the scene of Owen’s unfortunate cliff dive, Jack brainstormed fundraising ideas with Carina and Vic, who jogged over because she couldn’t sit home alone anymore grieving for Dean and wondering whether she and Theo were still a couple. Soon, they were distracted by the arrival of a couple of kids, one of whom was, unbeknownst to her, having her first period. Later, Vic confided in Carina that she had been having palpitations, prompting the doctor to insist that she accompany her to the ER. As you’d expect, Hughes balked. But if she told Carina there was a gas leak, so she’d better jump out a window, the doc would do it. In other words, Vic had no choice but to be sensible. 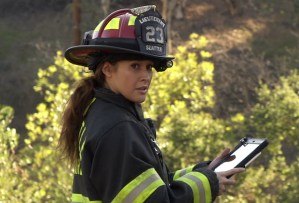 ‘DRIVE FAST’ | En route to the ravine in which Owen was trapped, Sullivan assured Maya that he’d support her if Natasha asked for a reference but insisted he didn’t really know the new chief. (Hmm… ) For his part, Travis wanted Vic back at work pronto so that she could process her grief around her family. At the scene of the accident, incident commander Andy kicked butt, doing her best to assure that Ben didn’t go rogue and put anyone in harm’s way to try to save his friend. Not that her best prevented Warren from doing exactly that by rushing down the ravine with Sullivan right behind him, basically saying over and over, “Dude, wait, no, stop, think.” By the hardest, Owen, who was conscious but trapped with a shattered leg, was eventually extricated from the SUV. As if to underscore how poorly Ben was taking orders, he had himself hoisted up with Owen when he was lifted to the top of the embankment to be taken to Grey Sloan. (It looked like he’d make it, but we wouldn’t know for sure for sure until Grey’s Anatomy — recapped here.)

After the stunts he’d pulled, Warren was, predictably, in hot water. “You risked your patient’s life,” barked Beckett. “You risked your team’s lives.” The water Beckett was in wasn’t exactly tepid, either. Natasha had already warned him that he’d used up his second chance. And, as Andy noted to him — impressing Natasha in doing so — “Your team isn’t well. Get them in order before I have to bury another friend.” Moving on to Ben, Andy asked if he was OK. It was all well and good for everyone to think of him as “Dad,” but it also put a lotta pressure on him, she acknowledged. Meanwhile, taking Travis aside, Natasha observed that his record made him a perfect candidate for promotion. Respectfully pass, said Michael’s widower. “When people die at work, I don’t wanna be the one who made the call that got ’em killed.” 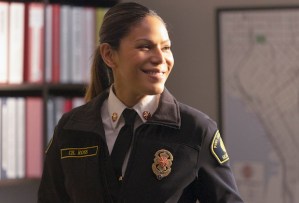 ‘DID YOU KNOW YOU’RE PREGNANT?’ | As the hour drew to a close, Travis asked Maya to talk to Beckett about getting Vic put back to work, Beckett informed Ben that desk duty and counseling were in his future, and having observed Sullivan in action and reviewed his record, Natasha gave him what she considered a long-overdue promotion to lieutenant. Afterwards, he followed her out to the parking lot. Ack, she all but said. “I just made you lieutenant,” she reminded him. “Don’t let them know that we’re friends.” He didn’t want anyone to know, either. If they found out, he’d lose all the credibility he’d worked so hard to build back up. Finally, Carina told Vic that her heart was fine, but… surprise! She was pregnant.

What did you think of the midseason premiere? The new chief? Ben’s risky moves? Vic’s shock? On your way to the comments, grade the episode in the poll below.