The Franklin Saint that fans saw in Snowfall‘s two-part Season 5 opener this week is the one star Damson Idris, the man behind the character, has always wanted to play.

“Jumping ahead 15 months was incredibly smart of the writers,” Idris tells TVLine. “We’ve seen Franklin grinding and being this kind of young, entrepreneurial figure in the drug game. But now it’s 1986 and he’s fully at the top of his empire, so the only way to go is down. That’s going to be exciting because they say, ‘Everybody can get it,’ but the real challenge is keeping it. That’s what Franklin is dealing with now.”

“Him becoming a father is great because Franklin finally has something to lose,” Idris observes. “I’ve always wanted to put some mannishness on this character and have him grow out of the boyish teen figure and truly become a leader, given the opportunity. We get to see him do that this season.” 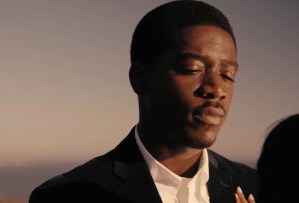 Idris, who is now a producer on the FX crime drama, adds that the one downside of that promotion is finding out things sooner than he did previously.

“I have a lot more power behind the camera. And I was able to get those scripts a lot earlier, but I didn’t want to,” Idris reveals. “As a fan of the show, I hate knowing stuff early and I tried to hold it off for as long as possible. That’s what was happening, particularly with Veronique’s character. Franklin definitely does not have the best luck with women, so we’ll see how this one works out.”

Franklin’s affinity for Veronique is undeniable, Idris says, and makes the stakes that much higher.

“He is in love with this woman,” the actor explains. “Veronique brings something new out of Franklin and this season, we get to see Franklin truly happy. She’s the reason why he’s going in the direction he’s going in and striving to get out of the game and build his real estate business. Veronique brings the business man out of him and his thirst for legitimacy.” 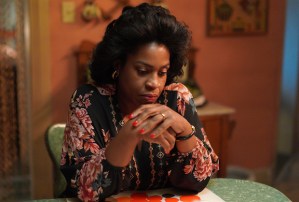 In a strange twist of fate, Veronique’s portrayer, Tyler, looks a lot like a young Michael Hyatt, who costars as Franklin’s mother Cissy. Idris swears that Tyler was not cast for that reason… but admits to appreciating the added layer of nuance.

“I studied psychology in college, and Franklin probably has a little bit of what Freud called an Oedipus complex,” Idris shares, laughing. “It wasn’t an intentional move, but Devyn Tyler is such a force and she plays Veronique with so much maturity, it would’ve been a mistake not to cast her. Veronique is forcing Franklin to grow up. I think that’s definitely the similarity Veronique and Cissy have. They both have a sense of pride and wisdom that Franklin is drawn to and both women know a lot about real estate.”

Franklin also wants to be a better man for Veronique and Sissy.

“Veronique is 26 and he’s 24, so that’s a new dynamic for Franklin, too,” Idris surmises. “She’s smart and accomplished and I’m just incredibly excited for fans to get to know her.”

What do you think of Franklin’s new love interest, Veronique? Is her resemblance to Sissy sweet or creepy? Drop your thoughts in the comments.