Dear gods, can Legacies never disappear for two months ever again? So much has happened in the real world (ugh) since December 2021, we nearly forgot how insane things had gotten in the TVD-verse.

Fortunately, Hope was more than happy to bring us up to speed on all things Lizzie: “I killed her, and she’s technically in transition,” Hope told Professor Vardemus atop Thursday’s long-awaited return. “She’d be a heretic, a vampire who is also a witch, able to siphon an endless amount of magic. Which sounds like a lot, so I did a sleep spell on her and I’m waiting for her to starve.”

First of all, Lizzie as a heretic is the stuff of dreams. Rather than making viewers suffer through yet another long, agonizing adjustment period, she awoke from the dead with confidence and control. Well, except when she nearly killed Vardemus before running head-first into the door at vamp-speed. Other than that, totally chill. She’s even rocking a leather jacket, which is honestly half the gig.

Unfortunately, Lizzie couldn’t follow through with her plan to kill Hope, and not for lack of trying. As it turns out, Lizzie had Hope’s blood in her system when she died, making them sire-bonded besties. Vardemus was speaking for the entire fandom when he said, “I am as shocked as you both that your dynamic could become even stranger.”

So while Lizzie has absolutely no desire to help Hope take down Aurora — much less investigate their new acquaintance Jen, a mysterious stoner who might also be an actual god — she really doesn’t have much of a choice. (“Going after gods and bitchy vampires? Hard pass.”)

Speaking of gods, we need to talk about Ben. And there’s a lot to talk about. First, his backstory: One of the most beautiful creatures ever to grace The CW, Ben is an old-world demigod who once stole power from the heavens to save his boyfriend. When those efforts proved unsuccessful, he bestowed the gods’ magic upon the people of his village… who immediately abused their gifts, resulting in the creation of monsters.

Far more important than any of that, however, is the insane chemistry between Ben and Jed. Prior to this episode, the idea of Jed being anything other than alpha-level straight honestly never crossed my mind. It is now all I can think about. I thought I detected a slight spark was there during Ben’s retelling of his tragic past, and that final campfire scene was all the confirmation I needed, cemented by this line from the sensitive demigod: “I’ve come to prefer Ben. It’s simple, like Jed.” 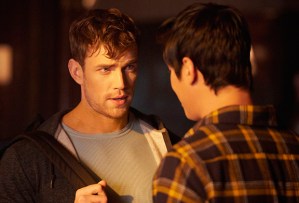 Lest you think I’m completely insane, here’s an eyebrow-raising snippet (and photo) from the synopsis for next week’s episode: “Back at the Salvatore School, students are speaking their minds, without knowing why, which makes Jed reveal a secret.” (A secret, you say? Whatever could it be!)

And while we’re addressing never-before-considered romantic connections, MG and Cleo? Is that going to become a thing? There’s definitely a mutual respect there, as evidenced by their conversation after capturing the saving Ben from a pukwudgie, which Lizzie accurately referred to as “the ugliest emotional support animal I’ve ever seen.”

I’ll say this: After all that mess with Ethan, I’d love for MG to develop feelings for someone other than Lizzie. Besides, Lizzie’s heretic storyline is already more interesting than any fleeting romantic entanglement.

Last but not least, let’s check back in with our boys in limbo. After much frustrating brain usage, the unlikely trio of Alaric, Landon and Ted solved a piece of the Sphinx’s riddle by encountering a jinn behind the bar at a seedy underworld establishment. (A jinni, on this show? What could possibly go right?)

OK, we have a lot to discuss. Are you digging Lizzie and Hope’s new dynamic? Did you also think (if even just for a second) that Hope’s “Klaus” key would lead to a surprise Joseph Morgan cameo? How do you feel about the introduction of gods into the TVD-verse? And I’m not completely imagining the Jed-Ben thing, am I? Drop a comment with all of your thoughts below.