After more than a decade away, NBC’s Law & Order returned on Thursday night with an episode in which returning favorites and new characters came together to solve a high-profile case.

THE CASE | Henry, a Bill Cosby-like figure who maintained his innocence after being convicted of serial rape and was recently released from prison, was found shot to death outside of his brownstone apartment.

Bernard and Cosgrove immediately questioned Henry’s wife Veronica, who claimed that their surveillance system was never activated because she’s from a small town where they don’t lock the front door. Sure, sis.

Since Henry was a public figure, the case garnered massive media coverage and even caught the attention of the mayor, prompting Bernard to make this revolutionary quip: “First time in 20 years that people actually care about a Black man getting shot.”

THE ODD COUPLE | Cosgrove and Bernard represented differing point of views — Cosgrove is old school while Bernard is the more progressive figure. 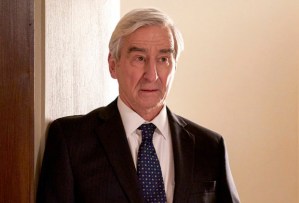 Cosgrove aggressively came at a potential Black witness and Bernard pulled him back, which prompted Cosgrove to bemoan “these young kids” for having no respect and grumble that saying the wrong thing could cost him his badge. Bernard suggested he try a different approach — like treated law-abiding citizens with basic human dignity — and Cosgrove noted that he’s wired to say what’s on his mind, and argued that people with “these damn phones” have “ruined everything.” In the next breath, though, he agreed with Bernard that cell phones do hold cops accountable.

A SURPRISING RETURN | During the investigation, the detectives learned that prosecutor Jamie Ross (Carey Lowell), who appeared in 50 Law & Order episodes, argued with Henry before his death. She prosecuted the original case and Henry’s guilty verdict was thrown out because her promise to Henry that she wouldn’t try him in court was considered legally binding. Cosgrove all but accused Ross of murdering Henry, since he was released due to her mistake.

THE REAL KILLER | A cigarette and surveillance footage of someone in a hoodie led them to Nicole, Henry’s first accuser. During her interrogation, Cosgrove practically promised her immunity if she confessed. The tactic worked and Nicole came clean, only to be taken away in handcuffs. Her arrest prompted protests outside of the courthouse. Price requested a lower bail, but the judge countered by setting it at $1 million — effectively keeping her locked up.

ARGUING ETHICS | Not happy about Cosgrove’s coercion, Price confided in his mentor Jack McCoy about how to approach this case. McCoy argued that cops are allowed to lie, and Price countered that coercion made confessions less ethical and less reliable. Price chose to prosecute the cast as ethically as he could, which meant tossing out Nicole’s confession. 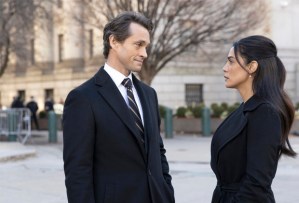 In court, he stuck to the facts of the case but ran into a few issues. For one, Veronica testified that she witnessed a struggle between Henry and Nicole, suggesting Nicole may have acted in self-defense. Plus, Cosgrove brought up Nicole’s confession during his testimony, despite it being inadmissible. Nicole gave a tearful recollection of her assault on the stand and again confessed, and the jury seemed visibly moved.

Maroun uncovered an interesting fact: Nicole met with Ross before murdering Henry. Price pieced it together that Ross likely knew Nicole intended to kill Henry and said nothing. On the stand, she pleaded the fifth, which all confirmed Price’s suspicion. Still, the jury seemed to sympathize with Nicole and Price decided to switch gears.

Maroun delivered the closing argument, revealing that her sister was raped and murdered, and so she understood how Nicole felt. Her argument that Nicole’s assault did not justify murdering another person resonated with the jury and the verdict came back as guilty.

AN UNHAPPY CONCLUSION | Price and Maroun may have won their case, but it didn’t feel much like a victory. Price offered comforting words to Maroun, noting that if they do things the right way, then whatever the jury decides is right. Maroun added that she’ll sleep at night if he requests the lightest sentence possible. Judging by Henry’s sympathetic look, he likely will.

What did you think of the Law & Order premiere? Grade the episode below and sound off in the comments.