The tension has been building all season long, but things finally came to a head this week between Karen and Fatima on Tyler Perry’s Sistas.

The interaction started off very bumpily as Karen rudely announced her pregnancy to Fatima and then lied to Zac’s new girlfriend about him calling her every day. This didn’t faze Fatima one bit because, as she stated, Zac had already told her about the baby news and she never saw Karen’s name when checking his phone.

A disappointed Karen didn’t stop there and tried to get under Fatima’s skin by talking all crazy and loud about Zac being the dad and Fatima needing to “be careful.” Fatima then calmly asked why Karen cared and added that nine months was a long time. Karen wondered if Fatima was threatening her, but Fatima said time would tell if she and Zac’s relationship would work out.

This was when Danni pointed out that Fatima was only saying that to make Karen feel better. She opined that Zac is crazy about Fatima, and Fatima admitted she’s crazy about him, too. Danni said that’s why their relationship would work, and Fatima agreed but added a paternity test from Karen would be prudent. 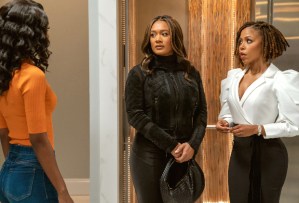 Karen asked if Fatima thought she was lying about Zac being the dad, and Fatima said no but added that a test certainly couldn’t hurt. A slightly annoyed Fatima attempted to conclude the conversation and said if Karen was finished, she could leave. But Andi wasn’t letting Karen off the hook so easily.

With a lot of nudging, Karen womaned up, apologized and confessed that she’d fibbed about Zac calling her and she’d only thrown that part in to wound Fatima — but it didn’t work. The hairdresser also acknowledged she’s not that mad at Fatima and barely knows her and only acted the way she did because she’s actually mad at Zac for not manning up for her.

Moved by Karen’s honesty and maturity, Fatima confessed that she understood Karen’s anger and that she’d been in her shoes. Not with the pregnancy part, of course, but definitely the part where she’d helped to make an ex-boyfriend a better man only for him to leave her for someone else. Fatima also promised that if the baby is in fact Zac’s, she would never mistreat the child, and Karen accepted her vow. 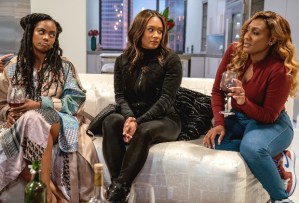 Fatima then turned to leave, but Danni stopped her and begged her to stay and have a drink. Danni declared Fatima “family now,” and an amused Fatima agreed and sat far away from Karen. Sabrina, Danni and Andi all agreed the situation was unfair to Karen and Fatima and surmised all women just want to be loved. Fatima agreed, but Danni told her to sit this one out because she’d found real love with a new and improved Zac.

Karen asked everyone to change the subject, but not before observing that Fatima got a Zac she’d never met. Andi demanded no more Zac talk, and the Sister Circle asked Karen if Fatima could stay and get high with the girls, and Karen conceded. Delighted by the news, the five ladies sauntered into the kitchen of Andi’s new penthouse and dished dirt about the guys in their lives. This may or may not have included Danni talking to Andi’s private parts in jest.

Later at Fatima’s place, Zac talked to Jake over the phone, and Jake apologized for Gary’s shady behavior. He also advised Zac to diversify his portfolio and buy some other stocks so that he would appear less guilty. Zac agreed, and the two said they would meet the next day to strategize and paint. Zac hung up, and Fatima walked in and admitted she liked the Sister Circle, even Karen.

She also let Zac know that Karen tried her, but when it didn’t work, Karen calmed down and acted like a normal person. Zac asked if Karen looked like a broken Hayden now, and this made Fatima laugh and promise nothing violent had transpired. He then told Fatima about the Gary situation and assured her he would handle things.

Speaking of handling things, Aaron called Karen and said his calendar math gave him the distinct impression the baby is his. Karen tried to argue otherwise, but Aaron swore no matter the paternity, he’d help her raise the baby. Aaron’s devotion scared Karen, and she abruptly got Aaron off the phone. 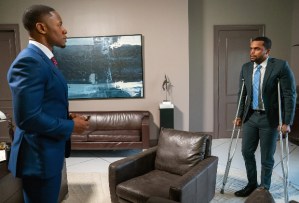 Back at Andi’s place, she played a video Gary made for her explaining the intricate layout of her penthouse. Andi found a bunch of love letters from Gary in one drawer and her favorite ice cream in the freezer. He also had an option that asked if Andi wanted him to come over or not, but it was unclear what Andi decided.

Gary didn’t stop there, but this time, he bothered Zac. He apologized about acting out of pocket regarding Andi and once again tried to get Zac to admit how he knew which stock to buy. Zac didn’t fall for his tricks, and when Gary hung up, Hayden limped into his office on crutches and said if Gary kept turning up the heat on Zac, he would keep spying on Andi for him. Ugh.

Jake walked in and admitted he’s never liked Hayden or Gary’s arrangement with him, but Gary 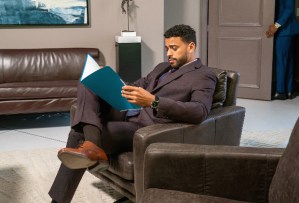 shrugged off his coworker and said he had dirt on creepy Hayden. Gary then asked Jake to meet with Zac, and when he did, Jake warned Zac about an anonymous tipster inquiring about him to the Securities and Exchange Commission. But Jake also said he would help Zac prepare for a possible SEC investigation by schooling him on everything he should’ve known about the company before purchasing the stock.

No sooner than Jake offered his help, the police walked in with an SEC agent and arrested Zac, causing all of us to wonder if Jake can still help save the day.

What did you think of the Karen and Fatima showdown, and are you worried about poor Zac? Drop your thoughts in the comments.