The Proud Family is back after 17 years, and while most of the cartoon’s familiar faces have returned for the Disney+ revival, one character is extremely absent.

Within the first few minutes of The Proud Family: Louder and Prouder, which is now available to stream, Penny and her friends discover that Dijonay’s main squeeze Sticky (voiced by Orlando Brown) has essentially ghosted everyone.

“I’m really gonna miss you guys,” Sticky says in a letter addressed to Penny. “My dad got a job in Japan. He said I didn’t have to go. I could stay with my cousins if I wanted, but I’ve had enough of that crazy Dijo…”

Fortunately, Penny stops reading before finishing Dijonay’s name — and her pal is too blinded by love to realize the truth. We’re left with this fleeting image of Sticky as his car speeds away as quickly as possible: 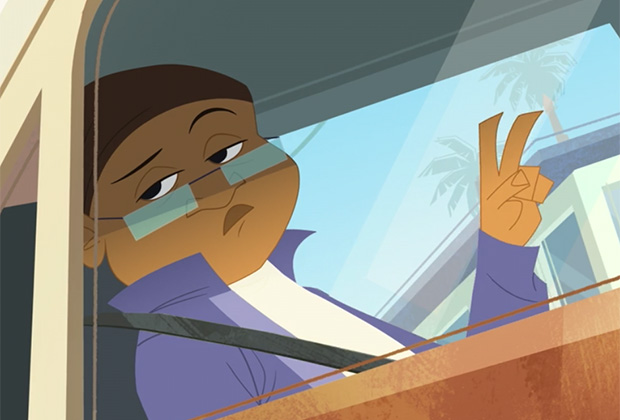 “We always wanted to expand out the world,” co-creator Bruce W. Smith tells TVLine of his decision to send Sticky packing. “In doing that, sometimes you have to revisit where characters are going and how we can bring in new characters. For us, expanding the world sometimes means you lose characters, but you also gain more characters that help grow the show in a direction we feel is necessary for this new version. That’s where a lot of our decisions lie.”

In this case, Sticky vacating his home leaves room for a new family to move in — one with two dads (Zachary Quinto and Billy Porter), a daughter (Keke Palmer) and a son (“A Boogie”).

But fear not, Sticky Nation. It’s possible that we haven’t seen the last of Brown’s character just yet.

“We never say never on our show,” Smith says of a possible return down the line. “That’s our thing. This show is about bringing in new characters and expanding the world, but also giving surprises at the same time.”

Of course, Brown’s absence from the project shouldn’t come as a surprise to anyone who’s been following the actor as of late. His most recent on-screen appearance was in the 2007 series finale of That’s So Raven, and he has yet to be invited back for the sequel series Raven’s Home, now entering its fifth season. Though he appears to be focusing on his rap career, Brown has made headlines in recent years for his outlandish behavior, including making bold statements about his famous friends and former co-workers.

Your thoughts on Sticky’s sudden exit? The revival in general? Grade the new Proud Family below, then drop a comment with your full review.