Chicago P.D.‘s Tracy Spiridakos found herself diving in a giant water tank in Los Angeles this past January, filming her part of the elaborate stunt that kicked off Wednesday’s episode.

The harrowing sequence saw Upton (played by Spiridakos) go out for a jog, where she witnessed a car swerve and then plunge into the Chicago River. With no one else around, the Intelligence cop dove into the freezing water and rescued the driver, who wasn’t so much a victim as he was the main suspect in their case.

Spiridakos’ stunt double Kelli Scarangello braved the partially frozen Chicago water — barges were used to move chunks of ice away — while the actress worked with an underwater stunt crew in tanks on the West Coast to make everything come together seamlessly on screen.

“I had to dive into the water wearing a winter coat… and I’m not a great diver,” Spiridakos tells TVLine. “I’m more of a cannonball person, so trying to learn how to how to do that part gracefully took some practice.” 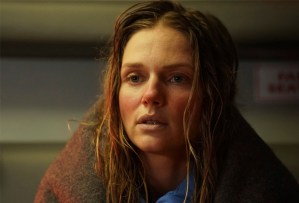 In preparation for the big stunt, which was filmed over several days, she worked closely with diving instructors to learn important safety protocols like accessing the oxygen tank as well as how to look comfortable in the water while hitting her specific cues.

Press PLAY above for a behind-the-scenes look at the sequence.

During the episode, titled “Still Water,” Upton grappled with the guilt of rescuing the man, who was a serial stalker and had assaulted dozens of other women. By the end of the hour, she found herself again holding his fate in her hands: Should she help someone who’d hurt so many, or let him drown in the pool after their big scuffle?

“That was that moment, just sitting on top and thinking that she could [let him drown] and then deciding not to and going back in,” Spiridakos explains. In the end, Upton chose to save the man rather than cross that metaphorical line as she’d done in the past.

“The decision to go in is that growth in her,” she adds. “There was nobody around, and she’s like, ‘I want to do the right thing… She had a moment of thinking about what she was going to do, who she was going to be, and then made the decision.”

After an emotionally tasking hour, balanced with refreshing Atwater/Upton banter, Spiridakos hopes the Chicago officer’s journey in the remaining episodes this season includes more of those rare on-screen moments with her Intelligence buds.

“Burgess [Marina Squerciati] and I haven’t really had any episodes together where we’re just friends and having a conversation, so I hope to see more of that,” Spiridakos shares.

As for Upton’s husband Jay Halstead, “there are going to be some Halstead moments, for sure. I don’t doubt that.”