Wednesday’s episode of The Amazing Race tested the teams like never before, causing one pair to nearly melt down in the process.

With only four pairs left in the race and the pressure at an all-time high, it was on like Donkey Kong as the teams continued racing through Greece with hopes of making it to finale night. But one devilish road block sent them on a wild hunt for a needle in a haystack, which brought all kinds of trouble for one of the duos. So who went home and who’s racing on? Read on for the recap.

ROUTE INFO | Kim and Penn, and Raquel and Cayla are first to depart to Theatro Dassous in Thessaloniki, Greece. While the flight attendants say they’re getting stronger and stronger, they’re still looking for that first win. The marrieds, on the other hand, are letting their family motto guide them: They’re “doing the best they can.” (With three wins in a row, I’d say that’s accurate!)

While Dusty and Ryan hope for a challenge involving Greek gods, Arun is making moves on the road and keeping his confidence high. “We’re not going anywhere,” he says. I hope he’s right!

ROAD BLOCK | Teams must search for a gold coin hidden underneath a stone. The problem is… there’s hundreds of stones to turn over. Maybe even thousands!

Kim steps up to the plate not knowing the arduous task that lies ahead. Soon enough, all four teams are in the rock pile going at it, and the struggle is real. Backs are breaking as all four participants stress out and gas out. Kim even has her hand on one of the lucky rocks at one point, and then comments about the Race‘s dun-un-un-un sound effect! Oh, Kim. We don’t envy you in this moment.

The teams’ patience is more than tested, but Arun prides himself on keeping his cool. Raquel eventually becomes the first player to find a gold coin, and it’s off they go to find Socrates at the Trigonion Tower. Kim finds the second coin and Arun the third, leaving the best friends behind to wallow in despair. 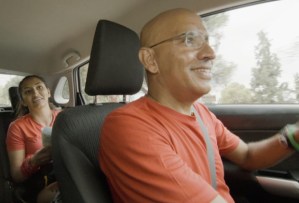 DETOUR | Raquel and Cayla find the Athens philosopher who serves them their next clue. In “Bring ‘Em,” players must safely carry 300 plates up a hill to a café. But in “Break ‘Em,” teams must smash through a pile of plates in search of a clue, but plates can only fly when the live band is playing music.

The YouTubers and flight attendants both opt to smash, while Dusty is about to lose it in the rock garden. Could this be Natalia and Arun’s chance to squeak on by? (Gotta love a couple of underdogs.)

Raquel and Cayla Hulk-out on the plates and find the clue, which gives them the location of the Pit Stop. Natalia and Arun get lost (shocker), while Dusty takes a breather at the stone search. The break re-centers him, and he vows to keep looking. That he does, finally finding the last of the lurking loot. Dad and daughter beat the best buds to Socrates, but they waste a lot of time doing so. The friends appear to be close behind, but is it just an editing trick?

Nat and Arun get to breaking… and bickering! They quickly find the location of the Pit Stop, but we all know they lack navigation skills. Ryan and Dusty find the clue, but did they find it fast enough to lap their competitors?

PIT STOP | Raquel and Cayla find Phil who tells them they’re team No. 1! They win a trip for two to Hawaii, and needless to say, they’re beyond ecstatic. Coming in second place are Kim and Penn, while Arun (!) and Natalia (!!) secure third. Ryan and Dusty come in last. They look down and defeated, but luckily for them: It’s a non-elimination leg.

So who will you be rooting for in next week’s season finale? Let us know by dropping some comments.