Gary nearly fooled us again when it seemed as though he really wanted to be friends with Zac on Tyler Perry’s Sistas.

As fans now know, Gary’s attempt was a ruse to use Zac to get back with Andi. When Gary asked Zac for help in matters of the heart with his ex in exchange for legal and financial advice, Zac wisely told Gary to kick rocks because he isn’t Andi’s pimp and he has no desire to play Cupid.

When the soapy BET drama airs this Wednesday at 9/8c, fans will see Zac get arrested on trumped-up charges regarding his fortuitous investment payout. The arrest may or may not have something to do with Gary and Hayden, who appear to be working in cahoots. Gary is still trying to reconcile with Andi, and Hayden is a hater who is trying to exact revenge on Zac and Fatima, aka “Zatima.”

Thankfully for Zac’s sake, his new friend Jake, who works for Gary, will be the one to help out when the cops come knocking. But can Zac trust Jake? Ryan Broussard, who plays Jake, says for now, Jake is all Zac has. 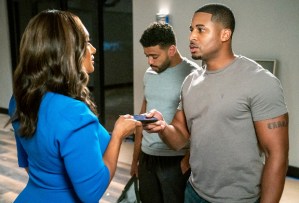 “Jake came into his life, and like any other friendship, they bonded almost immediately,” Broussard tells TVLine. “I know fans on Twitter are trying to figure out if Jake is his own man or if he’s doing Gary’s bidding, and we will all have to wait and see. That’s where we are right now.”

Broussard, whose acting credits also include Hulu’s Only Murders in the Building, adds that Jake is more of a good guy than his boss Gary, which isn’t hard to be, but still.

“Jake is the only male friend Zac has right now,” Broussard shares. “Zac is questioning Gary way more than he’s questioning Jake, and Jake’s actually trying to help out Zac. We just don’t know why yet. This is the closest relationship Zac has with any other male character. Because of this, audiences are going to find themselves wanting Zac and Jake to be friends. It’s exciting for them to develop a friendship. Jake speaks very highly about his lady the same way Zac does with Fatima. They’re both romantics who put all of their energy into the women they love. It’s like they’ve found each other at the right place and at the right time.” 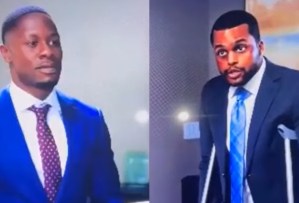 The biggest question is: Can and will Jake act independently of Gary, and what will that mean for him? Broussard has his theories.

“Gary is being Gary, whereas Zac is able to cut through the BS with Jake and see that he’s a good dude,” Broussard observes. “Jake might actually be looking out for Zac’s best interests. Everyone is rooting for Jake to be a good guy. I know I am.”

Do you think Zac can trust Jake? Will it enrage you if he double-crosses “Zatima”? Drop your thoughts in the comments.