Superman & Lois on Tuesday explored a possible connection between the couple’s latest foes, and no amount of banana-nut muffins can make their discovery easier to digest.

For starters, Chrissy’s investigation into Ally Allston basically confirmed Lois’ worst fears about the suspected cult leader. A nonconsensual drug trip transported Chrissy to an alternate world, one where she encountered a “bizarro” version of herself. It’s also worth noting that this other world was ruled by Ally, whom we’ve learned is carrying on her father’s legacy with the help of a mysterious pendant she inherited after his death.

Upon discovering that Dr. Faulkner had been murdered (gruesomely!) by Bizarro, Lois and Clark suspected that Ally would be his next target — and they were right. They arrived on the scene with seconds to spare before Bizarro came fumbling through the wall, triggering another very cool Hoechlin-on-Hoechlin smackdown.

Lara was able to subdue Bizarro at the Fortress of Solitude, allowing her son to properly communicate with his paper-skinned twin. Bizarro explained that he’s on a mission to save both his world and Superman’s, and that Ally is going to start a war. “Ally Allston will destroy everything,” he said. “Your friends, your family, you’ll lose it all… unless you kill her first.” 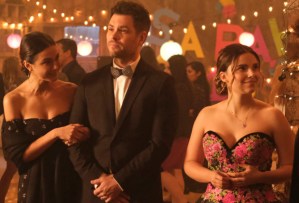 * Kyle’s mistress didn’t score an invitation to Sarah’s quinceañera (shocker!), but that didn’t keep her from showing up with bad news: She kinda-sorta told one of her friends about her affair with Kyle, and that friend maybe-definitely sold the story to Lana’s political opponent to derail her campaign. To make matters worse (if that’s even possible), Sarah saw them together and jumped to a misguided conclusion. This unfortunate turn of events put a damper on Kyle and Sarah’s father-daughter dance, but on the plus side, it added even more emotional weight to Lana’s speech about how proud she is of her daughter. So maybe we can call it a draw for now?

* Unfortunately, all is not well in the brother-verse. Despite insisting otherwise, Jonathan is absolutely going agro on Jordan, presumably fueled by jealousy over his brother’s growing powers. Oh, and by drugs. Can’t forget about that. After seeing his brother’s eyes flicker, Jordan agreed to keep quiet about what he thinks are Jonathan’s own budding abilities… but there’s no way any of this is going to end well.

Your thoughts on this week’s Superman & Lois? Any new theories, now that we know about a likely connection between Ally and Bizarro? Drop ’em all in a comment below.