To call the relationship between The Equalizer‘s Robyn McCall (played by Queen Latifah) and Jessie Cook (Jada Pinkett Smith) “strained” is beyond an understatement.

The duo’s antagonistic quips, however, look to be too fun to miss when the CBS drama resumes its sophomore season this Sunday at 8/7c.

In case you missed the news, Smith, who starred alongside Latifah in the 2017 blockbuster comedy Girls Trip as well as 1996’s gangster girl hit Set It Off, is reuniting with her real-life bestie on the broadcast procedural.

On The Equalizer, Smith will guest-star as Jessie “The Worm” Cook, a brilliant and prolific thief with a photographic memory, and who is also described as amoral, devious and unpredictable.

Latifah’s Robyn worked on a mission with Jessie in the past, when the CIA recruited the burglar for her nefarious gifts. Because the pair were so different philosophically, however, they bumped heads and vowed never to work together again.

One of Robyn’s clients-in-need, though, will force the big-hearted vigilante to break that vow and suddenly need Jessie to help her crack a case. 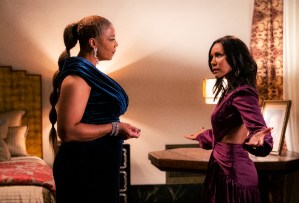 As seen in the above clip, this includes Jessie bragging to Mel and Harry about the time she escaped from a robbery at the Louvre in a stolen motorboat, and declaring that “fun” is her only pre-requisite.

This of course annoys Robyn who criticizes Jessie’s priorities, which in turn causes Jessie to immediately clap back.

Are you excited to see Latifah and Smith reconnect on screen in roles very different than their turns in Girls Trip and Set It Off? Check out the clip above and drop your thoughts in the comments.