Iggy might be giving his colleague Floyd Reynolds a bit of side-eye in the above photo from Tuesday’s New Amsterdam (NBC, 10/9c), but his potrayer Tyler Labine is coming to the surgeon’s defense .

Last viewers saw, Floyd had exposed The Resistance’s off-the-books operations to their adversary, medical director Dr. Veronica Fuentes, costing Lauren her job and Iggy his title as head of Psych. And yet, Labine believes Veronica and Floyd were both in the right to do what they did. “There has to be some accountability. We were doing something illegal, we were doing something highly unethical,” Labine explains to TVLine. “Veronica’s a bad guy, a villain, but she wasn’t wrong. We’re doing something bad. Floyd had to make a really tough decision.”

Below, Labine further opens up about why Iggy’s demotion is actually a good thing and why Max’s plan to save the hospital is going to “meet some resistance” from his friends in Tuesday’s episode.

TVLINE | The last episode ended in upheaval for New Amsterdam at the hands of Veronica, during which Iggy was basically demoted as the head of Psych. How is he handling that moving forward?
I’m going to say something a little controversial here: She wasn’t wrong. I mean, she had a point. Iggy was very tentatively taking patients. He’d never come back to the position being like, “I’m in!” There was always this kind of slower pace. Obviously, his ego has been very hurt. He’s angry. But she almost gave him permission to do what he was already doing, which was giving himself a demotion. He wanted less patients. He wanted to dedicate more time to individual cases and patients, and he was wanting to slowly dip his toe back in. So even though he found his passion again, maybe this might suit him for a little while. I don’t know what that means for the future of the department. I don’t know if we have another head coming in. I can’t speak on that. But other than his ego being hurt, I don’t think she was wrong. 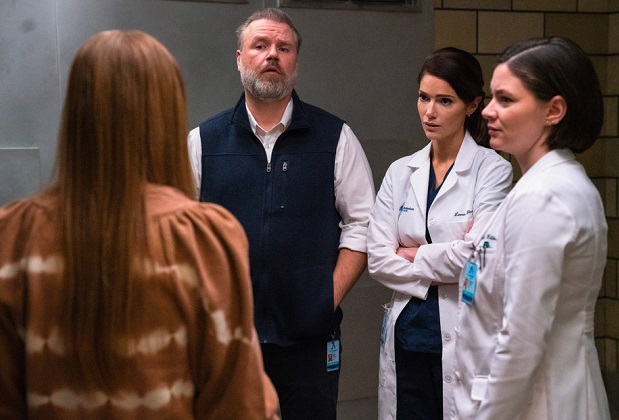 TVLINE | How does he feel about what Floyd did, though?
Peeved. But again, Iggy tries to look at things from a much more macro sort of standpoint. Even in that scene after The Resistance was toppled, and he had to excuse himself awkwardly, I gave Iggy a moment of looking at Floyd with more curiosity than anger. Because what led him there? He’s a good human being. We know that he’s a good man, he’s a good doctor. So I think it was more of like a, “What did we do that landed us here?” There has to be some accountability. We were doing something illegal, we were doing something highly unethical. So like I said, Veronica’s a bad guy, a villain, but she wasn’t wrong. We’re doing something bad. Floyd had to make a really tough decision. But he was also dealing with the fact that Max wasn’t around there, [and] the hospital feels like it’s falling apart. So I really wanted to [portray] Iggy in a place where he was looking at Floyd as a human being and not as a rat. 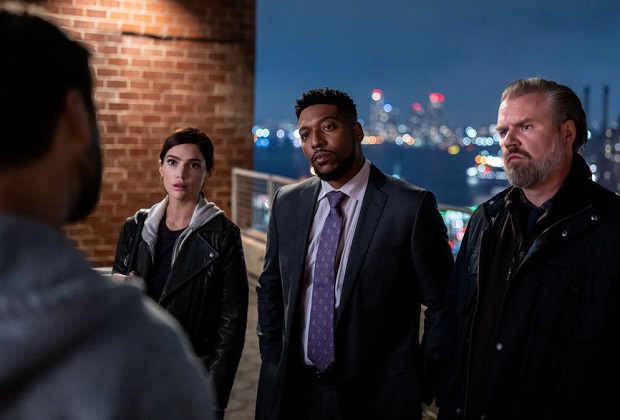 TVLINE | And now Max is coming in with this plan to save New Amsterdam. What can you preview about that?
Well, I think it’s high time that Max got his savior complex smashed a little. [Laughs] He’s coming back in, full force, guns blazing, and it’s not going to be that easy. Everybody there did their best to support Helen and Max leaving and helping them find their joy and made peace with it, and did what they had to do. They altered their lives so that they could now find a clear path to get to where they need to go and to deal with what’s happening in the hospital. And then for him to come back and say, “I’m going to come back now, and I’m going to fight for you guys, I’m going to make this right,” that’s almost more disruptive. That’s asking for another accommodation from everybody, who have really done their best to kind of move on. So it’s interesting. It’s not that no one wants him back. Everyone loves Max, we all love Max. But it’s not going to just be as easy as coming in and waving your magic wand and riding in on your horse and just saving the day. There’s a lot of feelings around it. He’s going to meet some resistance where he probably didn’t expect meeting that much resistance.

TVLINE | You have a very interesting patient case in this coming episode. What is Iggy navigating there?
It’s a father and son duo that come to Iggy, and initially, we think it’s the the son that’s got some psychological damage from being in a mass shooting. But we realize pretty quickly that the real problem is that the father doesn’t believe that the mass shooting actually happened. He believes it was a red flag operation, and he’s gone down the rabbit hole on the Internet. What’s really, really cool and impactful and touching about this storyline is I think a lot of us can relate through recent years of Internet access and misinformation and just information and then over COVID. I think some of us have felt like we’ve lost our parents a little bit to these QAnon rabbit holes or whatever. On the left or the right, there’s rabbit holes that are both as damaging, and you can lose people in those rabbit holes. And the real argument at that point is, do you want to be right or do you want to have this person in your life? That’s what happens: Iggy has to go with a very non-traditional way to resolve this that doesn’t actually feel like a resolution. It feels more like a loss, but it’s the only thing they can do to actually have a relationship as a father and son. 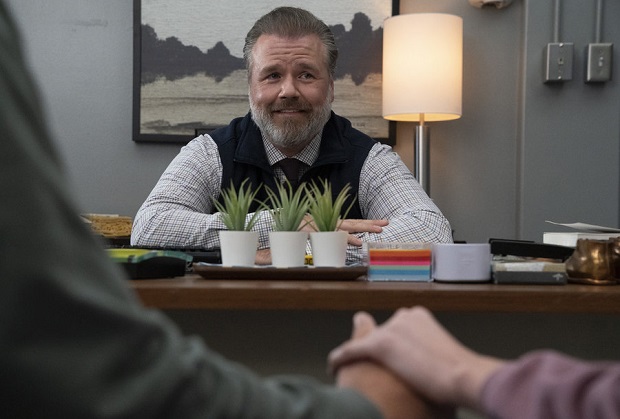 TVLINE | It struck me watching that storyline that week after week, as the resident therapist, you’re playing off these really great guest stars, delivering these very emotional, intense performances. What’s that experience like for you?
Lee Tergesen, who was the father in [this coming] episode, big fan of his. I’ve been watching him in very powerful, impactful performances from Oz to his comedy in Wayne’s World. I feel really privileged to be in these scenes. We have a lot of theater actors that come in and just like blow the doors off the scenes. And as a result, it’s made the Psych ward this really rich tapestry. These emotions and scenes, they’re really touching. As an actor, I’ve learned so much more about listening and reacting, honestly, in these scenes because I get to act opposite people who are really, really pouring their hearts into these roles, and sometimes all you can do is sit there in awe and just react, honestly, on camera. But it’s also made me realize like, oh, if I want to be a part of these scenes, I have to find a very organic way into them as well. I can’t just sit there and do nothing, but I don’t want to chew the scenery and steal these scenes. So it’s been fun as an actor to find what Iggy’s role is to maintain some sort of impact and not just be a wallflower or overwhelming presence in these scenes.