Sunday’s kickass premiere of the second of The Walking Dead’s three final-season arcs answered a whole lotta questions. What exactly does a hwacha do? Would Judith and Gracie make it out of the basement in one piece? For pity’s sake, was Dog OK?!? But it also left us with a whole bunch more. Luckily, showrunner Angela Kang was kind enough to Zoom with TVLine to provide answers. 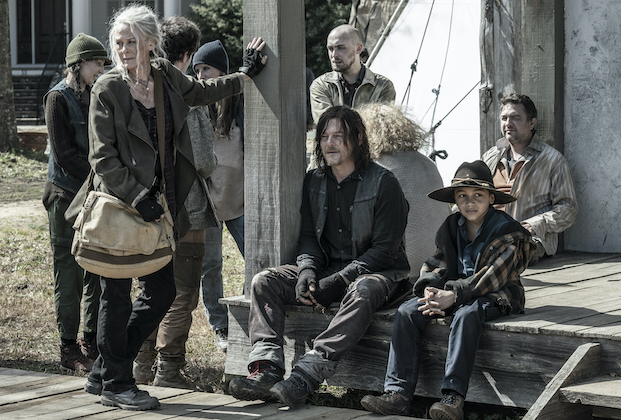 TVLINE | So, Angela, Maggie and Gabriel get, uh, pretty freakin’ dark in this episode (recapped here). Did that leave you with the feeling that, “OK, now I’ve gotta redeem them?” Or is that just how cold they have to be in their world now?
For both of them, this is at the peak of a run of just really hard decisions that they’ve made. By the end of the episode, their heads are spinning, and they have a lot of questions for themselves. We see it a little bit in the scene with Daryl and Gabriel by the fire talking about, “Is this just the way things are?” And you see it in Maggie’s grief over Alden and her surprise at seeing Negan kind of walk off [rather than fight her to the death]. She’s thinking, “Have I gone too far? Or is this exactly how far I needed to go?” So I think when we pick up with them next, we’ll see them figuring out how to move forward.

TVLINE | The timing of Alden’s demise struck me as interesting. Had he lived, it could have affirmed that Maggie was on the right path, making impossible choices. But since he died, it felt like it was being piled on her. “Nope, even doing all the hard stuff, it still won’t go well for you.”
Yeah, we talked a lot in the writers’ room about Alden, like, when Maggie leaves him behind, does she know that he’s dying and they’re never going to see him back? Or is there something to coming back to him? Ultimately, we felt that there needed to be a consequence to how injured he was by the Reapers. 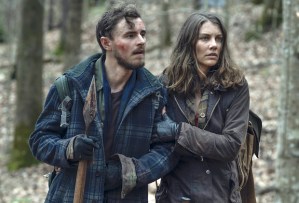 TVLINE | And a consequence for Maggie.
In some ways, it highlights for her that it’s sort of this thing where you win and you lose at the same time. Like, both sides [in that skirmish] lost so many people. It leaves her questioning, like Daryl is, is this all there is to life? Are we doomed to kind of be fighting to the death all the time? It didn’t feel totally right for there to be just a reward at the end of this. She was hoping that there would be, but the reality was, they all had to pay heavily for the war they undertook.

TVLINE | Was there ever any consideration of Alden becoming what Dante was in the comic books — a post-Glenn love interest for Maggie? ’Cause that’s what I initially pegged him as.
You are actually completely right. He was originally cast as a Dante-like character. Not Dante himself — we obviously used him in a different sort of context, as we do sometimes. But we changed gears at a certain point because Lauren [Cohan] left the show for a while, and we knew she was coming back at some point. But by the time she did, it felt like the characters had sort of evolved along different tracks than they would have if she’d been there the whole time. That happens frequently, like when one of our cast members takes a job and leaves the show or takes a hiatus. The storylines start to diverge from what our original intention was, so we sort of chase the new storyline. 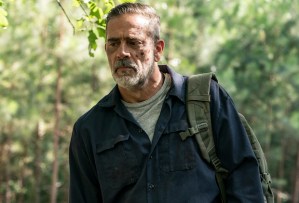 TVLINE | Do you think, in your heart of hearts, that Negan was right, that Maggie would have eventually made the decision, “Yup, I’ve gotta kill him, too”?
I don’t know if he was right. But I think he believes in his heart of hearts that he is right. And maybe she would have. I think what is true is that these two people, at this point in the story, cannot live in peace next to each other. He’s never going to feel comfortable around her, because he doesn’t trust that she won’t change her mind and go rogue again. And for her, it’s just too painful for her to be around him. Even knowing that he has made some moves to redeem himself, he’s never apologized to her [for murdering her husband before her eyes]. He’s openly said that he wishes he’d killed them all. They need some space from each other, so he’s not wrong in thinking that [it’s best that he strike out on his own].

TVLINE | I was really looking forward to Daryl and Connie’s reunion, and then… it seemed kinda… friendly. Like, was I making up the love story I thought was playing out between them?
[Laughs] Those two definitely have some chemistry. But I think Daryl has interesting chemistry with a lot of people. They definitely care for each other. The interesting thing is that even Carol recognizes that there is something special about the way they interact with each other.

TVLINE | At least I didn’t make it up — Carol saw it, too!
But things have changed over time, too. So we’ll see what happens with them next. 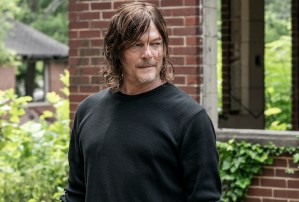 TVLINE | Honestly, I don’t know what I was expecting. Daryl wasn’t going to run up to Connie and be like, “I love you and should’ve told you ages ago!”
No, that’s not really Daryl, is it? What I thought was really sweet was the way Norman [Reedus] just dropped the basket of apples in that scene [when Daryl first saw Connie]. That was his choice, and there’s real excitement from that character that Connie’s alive and well after all the pain that he and Carol went through feeling like she had been lost in that cave.

TVLINE | Let’s talk about Daryl as a Commonwealth trooper — obviously, that’s a big visual shock. What can we glean from his and Maggie’s standoff about how hunky-dory things really are at the Commonwealth?
Any society has things that are working for it and things that are the dark side. For Daryl, he’s got to fall in with the Commonwealth army. The way he gets into it is maybe a little unexpected, but that’s the story that’s going to play out over the B block of the season. 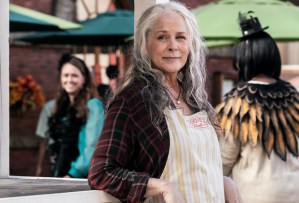 TVLINE | How significant is the Daryl/Maggie conflict? It seems… major, if she’s locking the gates and saying, “Nope, you can’t come in.”
We’ll discover over time what are the roots of that conflict and how we got there, but there’s obviously some clear tension that is happening between the Commonwealth and Hilltop. And that’s not an easy thing, given how big and powerful the Commonwealth is.