Fans’ obsession with what will happen next between Karen and Fatima on BET’s Tyler Perry’s Sistas has reached such a fever pitch, Novi Brown says even her family has begun harassing her for intel.

“I’m not able to tell them either,” Brown, who plays Sabrina, tells TVLine with a laugh. “Everybody is on edge and it’s really hard to keep plot twists to myself. We’ve created all of these nail-biting moments on TV and it is really exciting. A lot of people who watch the show have gone through similar things and that’s why they relate and find it so realistic. That’s why Sistas has been so successful.”

What Brown can say about the confrontational interaction between Zac’s ex-girlfriend Karen, who has announced her pregnancy news, and Zac’s current girlfriend Fatima is that it will further expose the personalities of their friends and onlookers Sabrina, Andi and Danni, as Season 4 continues to roll out Wednesday at 9/8c.

“Sabrina has her own drama with Calvin and Karen, and Fatima’s issues are maybe a welcomed distraction,” Brown explains. “She’s just trying to find the balance between spending time with her friends and investing in her new love with Calvin. New love requires new actions from you as an individual. She’s also empathetic and trying to handle both worlds while feeling like, ‘Maybe my relationship with Calvin isn’t so bad.'” 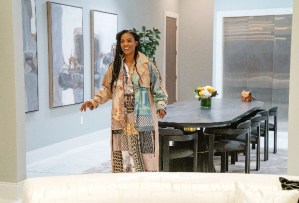 The bank manager is also the voice of calm and reason amongst her friends.

“At the core of it, Sabrina wants to be there for her girls,” Brown observes. “Within her sister circle, she’s very mothering and nurturing, as opposed to, say, Danni, who has never liked Gary but suddenly wants to give him a chance because he bought Andi a penthouse. It’s going to be interesting to see how all of these women react to Gary and Fatima moving forward.”

What is equally revealing, Brown says, is how some Sistas viewers are so invested in the storylines they call the characters hurtful names on social media.

“That’s the power of art,” the actress offers. “Fans get so immersed in the emotions and realities of these characters and what they are going through, it becomes a symbolic representation of where they are in their own lives. Some fans call us ‘stupid’ but others also say stuff like, ‘I have been Andi before’ or ‘My cousin is just like Danni.’ We’re dealing with a lot of people’s realities and how they’ve dealt with situations like this, or how their loved ones handled it.” 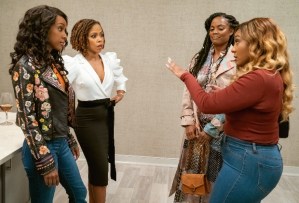 In that way, Brown argues the soapy series is more than television drama.

“It’s a social conversation about what’s going on today and how we relate to one another,” she attests. “It’s all of those things put together and as an artist, my only job is to make social commentary that people want to see.”

What do you think is going to happen when Karen and Fatima meet up at Andi’s? Do you think things will stay civil or escalate to violence? Drop your thoughts in the comments.