If you’re looking for a dark, twisty, Black Mirror-y sci-fi thriller, Apple TV+’s Severance is now open for business. Ready for your orientation?

Friday’s premiere opens on a stark image: a woman (Man Seeking Woman‘s Britt Lower) lying face down on a long conference table. As she wakes up dazed, a voice on the intercom gently prods her to take a brief survey. She doesn’t know where she is or how she got there, and she rushes around the room, trying to open each door in a panic. But they’re all locked. She finally gives in and takes the survey. First question: just her name. But she doesn’t know. She doesn’t know where she was born or the color of her mother’s eyes, either. (She can name a state, though: Delaware.) She’s horrified: “What did you do to me?” As she collapses to the floor, a man enters and tells her, “That’s a perfect score.”

We meet the man behind the voice, Mark (played by Parks and Rec‘s Adam Scott), as he’s crying in his car. He pulls himself together and walks into his office building, going through an elaborate security procedure before taking an elevator — and on the elevator, we see his eyes flutter strangely. When the elevator stops, Mark gets out and walks down a comically long hallway of blank white walls as peppy music plays, finally arriving in a room with four cubicles clustered together. He’s joined by coworkers Dylan (Zach Cherry) and Irving (John Turturro), and we learn they work for a company called Lumon in the area of “macrodata refinement.” (Whatever that is.) 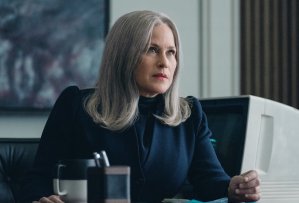 Mark is summoned to the office of his boss Harmony Cobel (Patricia Arquette), who informs him that his friend Petey is “no longer with this company.” But that means Mark has been promoted to department head. (“A handshake is available on request,” she adds — and he requests one!) His first order of business: questioning a new trainee. And yep, it’s the opening scene again, except now we see it from Mark’s perspective, questioning the woman from a control room and using pre-written questions from a big binder. When he enters the room, the woman wonders, “Am I livestock?” She can’t understand why she has no memories, and Mark laughs it off, telling her that her name is Helly and she’s been hired to a position on “the severed floor of Lumon Industries.” She hurls the intercom at him and gives him a nice head wound, and he works to calm her down: “There is a life to be had here, Helly.” She demands to be let go, and when she asks three times, he has to comply, showing her to an exit door. When she tries to pass through it, though, she just ends up back in the same office hallway. “Is this hell?” she asks. 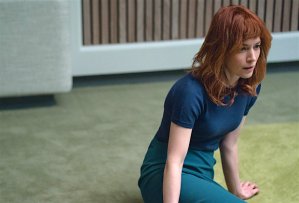 She gets her answer when she sits down for the video portion of her orientation: a recording of herself smiling and telling the camera she consents to undergo a procedure known as “severance,” where her work memories will be surgically separated from her personal memories, and vice versa. The procedure is “comprehensive and irreversible.” She asks Mark if she has a family. “You’ll never know,” he calmly replies. She takes the empty fourth cubicle vacated by Petey, and soon, Mark is leaving for the day, and in the elevator, his eyes do that same strange fluttering. He finds a note on his car that explains the head wound was from him slipping and hitting his head — and offers a gift card as an apology. He drives home to an empty house, drinks a beer and bugs his neighbor about her trash cans. You know, normal domestic stuff… apart from the whole “memory wipe” thing.

Mark gets a visit from his pregnant sister Devon (Jen Tullock), who takes him to a dinner party at her place. We learn that Mark used to be a history professor… and that he had a wife who died, too. The other dinner guests probe him about working for Lumon and the severance procedure, and it seems to be a point of national controversy, with Congressional hearings and everything. Devon supports him, but she’s concerned about how he’s dealing with his wife’s death: “Forgetting about her for eight hours a day isn’t the same as healing.” He ends up sleeping there and wakes up in the middle of the night to get a drink of water — and as he looks into the woods, he sees a man out there staring back at him. Huh?

Later, as he’s enjoying his gift card at a local restaurant, Mark is approached by that man: It’s Petey, his old friend from work. Mark doesn’t recognize him, but Petey says he bypassed the implant and undid his severance. He thinks Lumon is after him (“Nothing down there is what they say”) and gives Mark a card. In it, Petey writes about how they used to wonder about their outside lives and what kind of “monsters” would do that to them. On the back, there’s an address, and Petey tells him to go there to find “the beginning of a very long answer.” Oh, and back at home, Mark runs into his neighbor with the trash cans again, and we finally see her face: It’s his boss Harmony Cobel!

How did you enjoy your first day at Severance? Grade the premiere in our poll, and hit the comments to share your thoughts.