Station 19 showrunner Krista Vernoff meant to lighten up in Season 5, really she did. But between Dean’s death, Ben and Bailey’s looming fight for custody of Pru, Andy and Sullivan’s divorce, and Vic’s breakup and breakdown, it just wasn’t in the cards.

So when the Grey’s Anatomy spinoff returns on Thursday, Feb. 24, “the back half of the season takes a little bit of a darker turn than [I first planned],” Vernoff told TVLine during this year’s SCAD (Savannah College of Art and Design) TVfest, which streams through Saturday. (Passes are available for purchase here.)

The EP hoped to let the good times roll. So much so that now, “the writers room keeps mocking me,” she said, “because I came into this season, after [the] Year of COVID, like, ‘It’s the Season of Fun, you guys!’ And the whole first month, they were pitching me darkness, so I was like, ‘No! It’s the Season of Fun!’ 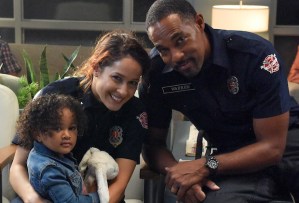 “And then everything I got pitched was darker than anything” that had come before, she continued with a laugh. At this point, “they just start singing at me, ‘Seasonnn of Funnn!’ It’s not superfun [for the characters], but it’s superfun for the actors to play.”

Vernoff got no argument on that subject from Jaina Lee Ortiz, who plays Andy. “Thanks to Krista, [Herrera’s] got turmoil and tragedy thrown [at her from] every direction, which makes it exciting, so I’m never bored,” she said. “I used to think I had so much in common with Andy, but as the seasons go on, I’m like, ‘I’m nothing like that girl.’”

As for Vic, portrayer Barrett Doss sighed, “The struggle continues” in the wake of Dean’s passing. “She still has a journey left to go on this season, and I’m really excited for everyone to go on that ride with her. 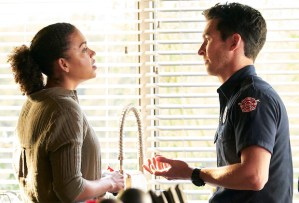 “It’s challenging, and I love watching such a happy-go-lucky character go through some dark, dark stuff,” she continued. Factor in her split from boyfriend Theo, and yeah, “she’s on the struggle bus. But if anybody can bounce back, that’s your girl… I’m excited to see how people feel about the next chapter.”

What are you hoping to see — and afraid will happen — before the end of Season 5? Hit the comments.