Jazz is usually a bubbly and happy sort on Freeform’s collegiate rom-com grown-ish.

That joyful facade came crashing down on this Thursday’s installment when her recent breakup with Des turned out to be too much to take, and suddenly Jazz was staring blankly at the TV screen and eating chips while the world and all of her friends seemed to pass her by.

Making matters worse, the college senior is no longer running track, and her best friend/twin sister, Sky, is still overseas for the Olympic games.

Worried about their typically upbeat bestie’s mood, Zoey, Ana and Nomi staged an “intervention” of sorts to make sure Jazz was OK. Slightly annoyed by their questions, Jazz swore her split with Des didn’t give her the blues, but she also admitted she hadn’t seen her therapist in a while. So Jazz agreed to schedule an appointment to make her friends happy and get them off her case.

One of the first questions her psychiatrist, Dr. Jenkins, asked was if Jazz was meditating, utilizing self-care practices before bed, and unplugging from social media as she had advised. Jazz said she had done all of the above, but none of those suggestions were working anymore. She also confessed that the overwhelming pressure of graduating and figuring out what she wanted to do with her life was also stressing her out. 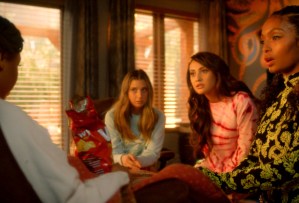 Vivek, who used to sell drugs, also chimed in and stated that antidepressants aren’t a party drug and sometimes it takes a couple of weeks for them to kick in and make things better. Sadly, Jazz wasn’t listening and instead of taking into consideration what Nomi and Vivek had to say, she lashed out and coldly called Vivek a college dropout with a drug charge on his record and accused Nomi and Zoey of being “pill poppers.” Ouch!

Jazz then doubled down and said that as an athlete, she trained long and hard to always be in control of her mind and body, and that antidepressants were a crutch and a sign of weakness. She asked for more time to work through her depression on her own and sauntered off. Annoyed by her arrogance, Vivek wondered aloud if Jazz was so good at mind and body control, why didn’t she make the Olympics? Zoey pretended to be offended, but when Vivek said she was thinking the same thing, she admitted she was.

Doug came through to cheer up Jazz after her friends reached out to him. The exes hugged like old chums and Doug made Jazz laugh by repeating all the lopsided advice his dad (and all Black dads) give when their kids get depressed — go to church, take a poop, and take a hot bath. Jazz chuckled and admitted those tactics hadn’t helped either. Jazz then asked what he thought about antidepressants and Doug told Jazz she’s one of the strongest people he knows. He said taking pills wouldn’t change that and he’d hate to see her close herself off to a solution like medication that could actually help.

Encouraged by Doug’s pep talk and presence, Jazz started running again… and ran right into Des. She apologized for attempting to pick and choose the parts of him she liked and added every part of him is amazing. Des thanked her for saying so and added that he hoped to see her around. And after her run, Jazz went home, took an antidepressant, and forged ahead.

What did you think of the way Jazz confronted her situational depression? Are you hopeful she’ll be able to turn things around for the better? Drop your thoughts in the comments.