If Danni and Preston’s relationship impasse on Tyler Perry’s Sistas is frustrating you, actor Trinity Whiteside feels your pain.

The actor, who has been inspiring fans to root for the love between Danni and his character Preston ever since Season 2, says Preston is just as much to blame for the couple’s strife on the popular BET drama, which airs Wednesdays at 9/8c. For starters, taking Tonya on a date and parading her around Karen’s salon, not once but twice, certainly didn’t help matters.

“Unfortunately, Preston used Tonya as a bargaining chip with Danni,” Whiteside observes. “I don’t agree with his methods, but he wants Danni to see she’s not the only one checking for him, and it doesn’t seem to be working. If anything, it backfired and upset Danni, and now she’s angry. That’s why he had to come clean about not liking Tonya and thinking about Danni the whole time he was with Tonya.”

In a perfect world, Preston’s honesty would’ve encouraged Danni to be more honest, too, and admit she wasn’t going on a date but hanging out with her girls. Instead, Danni doubled down on the lie and accused Preston of trying to make her his love expert.

“They both play games, and I think that’s part of the problem,” Whiteside explains. “Now they’re in a situation where they’re going tit-for-tat with one another. It’s a lot of back-and-forth with them because the lack of communication is still a major issue between them. They are not on the same wavelength, and that has been problematic from the start. Preston expressed to Danni that he does love her, but at this point, the love hasn’t been reciprocated.” 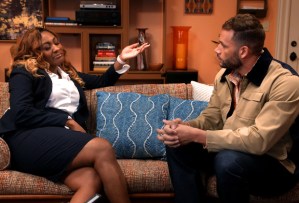 Compounding the problem is a lack of commitment and candor, Whiteside adds.

“There’s too much of a gray area,” he continues. “No one is saying, ‘You are mine, and I am yours.’ If they were committed, things would be better. Preston wasn’t asking Danni to raise him up. He was telling her to show him how she needs to be loved, but she took it the wrong way. Preston can’t read Danni’s mind. It’s good when men say, ‘Tell me what you want,’ because that doesn’t happen all the time.”

Without revealing too much about what will happen next in Season 4, Whiteside says he’s rooting for a Danni and Preston reconciliation just as much as fans are.

“Preston and Danni clearly have chemistry, and I think that’s why fans are so drawn to them,” Whiteside surmises. “Both characters are likable, and Mignon and I have a great on-screen connection. Preston and Danni deserve love, and it needs to be reciprocal. I really hope they work things out. Every time we get scripts, I’m like, ‘OK. Let me see how this is going to go.'”

Do you think Danni and Preston should be together? Or is it too late for them? Drop your thoughts in the comments.