You would think by now that Chuck would’ve figured out a couple of things on Showtime’s Billions. But we’re six seasons in, and he’s still underestimating his opponents and his allies and as a result, learned the hard way Sunday night that Kate Sacker was tired of waiting.

Before things became imminent, Kate told her boss and mentor she was ready to make the leap to politics. But Chuck asked her to hang on at his attorney general’s office just a little bit longer, because they still had to fight the good fight and might win this time. In the meantime, he told Kate she should go through with her interview with Prince, who was looking for the best and the brightest to represent him legally during his Olympics bid.

And that’s what Kate did. She met with Prince, sipped his expensive Elida Geisha coffee, and promptly turned down his job offer. She also went back to Chuck and told him about Prince’s plan to give New Yorkers free Wi-Fi as an incentive to root for the games coming to town. By telling Chuck this, he was able to throw a wrench in Prince’s altruistic ambitions and make things a lot harder and more expensive for the independent billionaire. Chuck also had his boy Ira audition for Prince’s legal counsel gig.

Making matters worse, the Wi-Fi idea was Taylor’s and they really wanted to make it happen to get that much closer to their philanthropic outlook for the future. In order to save the plan, Taylor convinced Prince to throw more money at it, and he did at first. Ultimately, Prince partnered with the big telecom companies to make the gratis Wi-Fi a reality, which disappointed Taylor not just because the African countries they wanted to help got cast aside, but the telecom giants got a bigger piece of the pie than they should have. 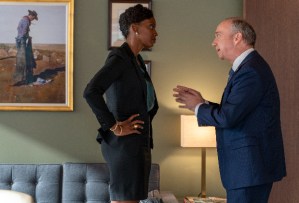 While Prince didn’t want Taylor to lose faith in him, his desire to woo Kate away from Chuck mattered more. So while Kate was out jogging around her neighborhood, Prince rolled up on her and not only showed her the space where her campaign office would be based, but he said all the words Chuck had failed to say — that he would back her financially when she ran for Congress. That, coupled with Wendy’s persuasive words of wisdom about how it’s better to leave too early than to leave too late, was all Kate needed to make the leap.

Later, when Chuck realized that he wasn’t the master chess player he once believed he was, and that he’d failed to protect his queen, an always regal Kate pulled up one last time to say goodbye. When Chuck asked Kate why she had left him to work for Prince, she explained she was ready to do some teaching of her own and become Chuck’s peer instead of his acolyte. Check and mate.

Were you surprised Kate jumped ship? And did seeing everyone’s price tallies onscreen drive you crazy or did you enjoy it? Drop your thoughts in the comments.