Helen Decatur has always been the strongest woman in Serenity, and that strength was put to the test in more ways than one during Sweet Magnolias‘ second season. 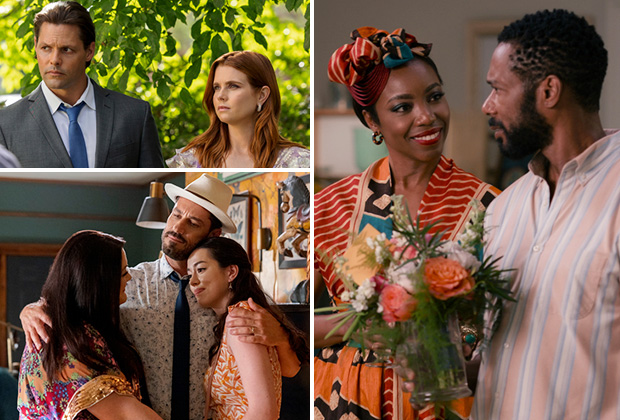 Let’s rip the Band-Aid off and dive right into Helen’s most painful trial: Just two episodes after sharing the good news of her pregnancy with the other Magnolias, Helen suffered a miscarriage. It was a devastating turn of events, one that ultimately gave Helen a clear focus of exactly what she wants out of life.

“It was tough, but it’s a discussion that a lot of people — husbands, wives, boyfriends, couples — don’t discuss,” Heather Headley tells TVLine. “Nobody ever knows what to say, so we don’t talk about it. I like that it was raw and out there for her, because it is devastating. She’s getting older and wants to have a baby, and now she’s finally having a baby with the man she’s always wanted to have a baby with. (Whether she tells him or not, she doesn’t care. It’s going to happen.) And then it’s ripped from her. It gets messy and tragic, but God bless friends who show up when you need them.”

And God bless that voice. The Tony and Grammy Award-winning actress finally got a chance to show off her pipes this season, beginning in the premiere with a brief rendition of “It Is Well” at the hospital. But the real showstopper was saved for Episode 6 when Helen and Erik treated their inner circle to a karaoke performance of Bonnie Raitt’s “Something to Talk About.”

“We’d been trying to figure out how to [work music into the show], and I remember asking the producers, ‘How well does Helen sing?'” Headley says. “Is she tone deaf, or… has she been on Broadway? They were like, ‘She might be able to sing pretty well,’ so I was like, ‘OK, I’ll get her somewhere in the middle.'”

But as those who watched the performance can attest, it was anything but middling. Headley was fully in her element on that stage, even if her singing partner didn’t necessarily share her confidence at first.

“Poor Dion [Johnstone] was so nervous about it,” she says with a laugh. “He was like, ‘Should we rehearse?’ And I was like, ‘You don’t rehearse karaoke! Don’t worry about it.’ It was so fun, and I love that it happened in a clever way. It wasn’t just me breaking into song and everybody wondering where that voice came from.” 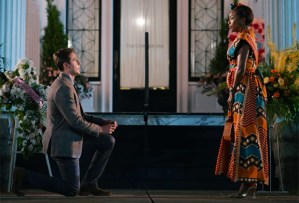 OK, now let’s talk about the big moment. You know the one. The ring-out, down-on-one-knee finale cliffhanger that will drive fans insane until the show (fingers crossed!) returns for Season 3. It came as quite a shock to Helen, and perhaps even more to Headley.

“I remember reading the script, turning the page and wondering, ‘What comes after? Oh, it’s me this time. Oh no!'” Headley recalls of finding out that her character was at the center of the season’s final cliffhanger. “I remember how much people yelled at me, even during the pandemic from a social distance, after the car accident. ‘You can’t leave us like that!’ And now it’s about me! These people are going to jump me in the streets.”

Headley is fully aware of “the whole Team Erik, Team Ryan” thing, but she really does see the good in both men. With Ryan, Helen “has this thick sludge of a relationship, just a love relationship. They’ve loved each other from the time they were young. Every time they’ve left each other, they’ve come right back. These people know each other inside and out.” But Erik, in addition to being a fabulous karaoke partner, “can be such a great man. And I’m sure he’s ready to be a father. He presents all of that.” Still, Headley could see her character “going either way,” so she remains first and foremost on “Team Helen.”

As should we all.

Your thoughts on Helen’s season of surprises? Grade Sweet Magnolias‘ sophomore run below, then drop a comment with your hopes for a potential third.