The jury is still out on whether or not Calvin won his fist fight against that restaurant owner on Tyler Perry’s Sistas. But one fact is clear — he stayed on his feet.

Sadly for Calvin, the same couldn’t be said when he tussled with Jacobi in Season 3. The clip of him spinning and falling like a drunken ballerina before hitting the floor was so funny, it went viral in real life. It even garnered a response from rapper Snoop Dogg. Laughs aside, Anthony Dalton, who plays Calvin, says the reason his character brawled with the stranger wasn’t about Sabrina or Jacobi this time — it was about him.

“Calvin’s two white gay dads couldn’t teach him how to be a Black man,” Dalton divulges to TVLine. “But they did teach him how to love himself and defend himself. He had to say something because that man was disrespecting him.”

Calvin explained his reasoning to Sabrina, and she seemed to understand his perspective, particularly when he admitted he would’ve confronted the guy even if Sabrina weren’t there. He also apologized for leaving her at the restaurant in the heat of the moment, which forced her to take a rideshare home. Now Sabrina, who has forgiven him, has told Calvin she will drive her own car when they go out on dates. 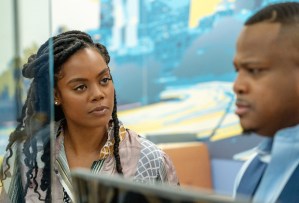 Although Sabrina shared her bad-date experience with Danni, she didn’t tell Maurice what happened. Later, when Calvin figured out Maurice didn’t know the details, he was pleasantly surprised that Sabrina kept something to herself.

Of course, this didn’t stop Maurice from teasing Calvin about his embarrassing fight with Jacobi and questioning his ability to fight once Calvin told him what happened. Still, Calvin refused to take it to personally.

“Calvin is compassionate when it comes to Maurice,” Dalton explains. “He can see through the pain Maurice doesn’t address. Maurice handles his inner pain by telling jokes. That’s what makes Brian Jordan Jr.’s performance so beautiful, especially when he shares Maurice’s rare moments of vulnerability. Maurice set this precedent of joking and deflecting, and when he actually shares and shows his vulnerable side, it’s beautiful. Calvin can see through Maurice’s jokes because he’s intuitive and a good judge of character.” 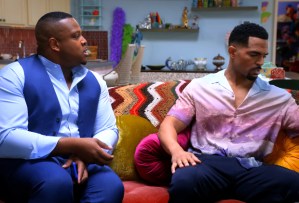 When Sistas airs this Wednesday (BET, 9/8c), the relationship between Calvin and Sabrina will progress, but not at the pace fans might prefer, Dalton reveals. (The actor can also be seen in ALLBLK’s anthology series Covenant, which is now streaming.)

“All I can say is enjoy the ride,” Dalton teases. “Everyone wants to know if they’re going to be together or not, but relationships are tricky. Fans want their fixes right away. Romance isn’t rapid. People are in different spaces in their journey, and Calvin and Sabrina are still growing and evolving. Hopefully, they will grow together instead of apart.”

Do you want Sabrina and Calvin to become a committed couple? Or should they break up? Drop your thoughts in the comments.