When Law & Order returns to NBC later this month, fans can expect the action-focused series that made it a television staple.

During the show’s panel at the Television Critics Association winter press tour, Sam Waterston, who will return as fan favorite Jack McCoy, opened up about the revival’s focus on the story rather than the characters.

“Dick [Wolf] always says that action is character, and the actions of McCoy are being defined by [showrunner] Rick [Eid], and it’s different and interesting, and it’s great to find out,” he said during the panel. “It’s the nature of work. Work is cool.”

Anthony Anderson, who will reprise his role at Det. Kevin Bernard, added that “the magic of the show is that you never really know or get into these characters’ personal lives, which allows you to pick up this show at any given moment no matter where you are, and still be that much invested in the show and still not be lost. Because it’s not so much about us. It’s about the crime. It’s about solving it, moving it along and bringing law and order to the world. I think that is part of the magic of what Dick has created.” 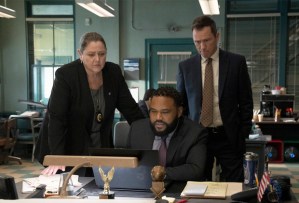 Although the show will be story first, Eid noted that “you’ll see hints of personal backstories and how they inform decisions and choices that people make,” especially with Odelya Halevi’s ADA Samantha Maroun in the season premiere.

According to Hugh Dancy, who will play senior prosecutorial assistant Nathan Price, fans can also expect to see ripped-from-the-headlines stories that reflect our world today. “One of the first things that Dick said when he addressed us all is how well the engine of the show can be used to accommodate whatever the conversation or the debate is, and it does,” Dancy shared. “Every single episode takes the stories out of the headlines and then uses that as an entryway into the arguments that are being had across the country right now.”

The Law & Order revival — premiering Thursday, Feb. 24 at 8/7c — joins a long list of Dick Wolf procedurals currently airing, including NBC’s Law & Order: SVU, Law & Order: Organized Crime, Chicago Fire, Chicago P.D and Chicago Med as well as CBS’ FBI and spinoffs FBI: Most Wanted and FBI: International. Given the popularity of crossovers in the Dick Wolf Expanded Universe, Eid isn’t ruling out the possibility of the Law & Order crew mixing it up with other shows.

“I think crossovers have been very successful in the Dick Wolf universe and the Chicago universe and FBI universe. They’re fan favorites,” Eid said. “There’s a chance there’ll be a three-part or two-part Law & Order crossover somewhere along the way. Anything’s possible in this universe.”