The following contains spoilers from the penultimate, Feb. 10 episode of HBO Max’s Peacemaker.

This Thursday on Peacemaker, as the small-screen offshoot of The Suicide Squad hurtled toward its finale, the ARGUS team was dealt a devastating blow, while Chris squared off against no less than his own father aka the White Dragon.

In the wake of the (fake) diary going public, a shook Chris was prompted to flash back to the fateful moment from his childhood, where he and his brother Keith were pitted against each other in some sort of Auggie-organized, front yard fight club. Early into the scuffle, Chris clocked Keith, who fell straight back, out cold… and then began twitching on the ground while foaming at the mouth, before dying. 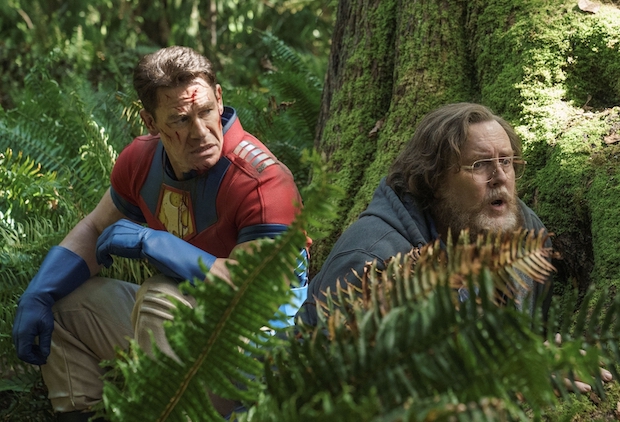 Coming out of that difficult memory of Auggie deriding him as a murderer, Peacemaker led Vigilante, Eagly and a reluctant Economos on a mission to take out the “cow,” though their van was literally knocked off course by a rocket-fueled White Dragon. Auggie was poised to off his son at close range using wrist blasters, but Vigilante interrupted with gunfire and then a grenade that did damage to both White Dragon and himself. Peacemaker, Eagly and Economos fled into the woods, leading White Dragon and his hooded minions on a wild goose chase, while a battered Vigilante attempted to drive off in the baddies’ sedan… but quickly passed out behind the wheel.

Meanwhile, Harcourt confronted Adebayo about betraying the team with the planted diary; Leota explained that Peacemaker was decided to be a perfect patsy, though the diary was discovered ahead of schedule. Harcourt realizes that Adebayo is Amanda Waller’s daughter and relays the bombshell to an arriving Murn, who… already knew. Murn orders the ladies to mobilize and meet up with him later, but Detective Song and some of her fellow Butterflies rendezvous with him first. Song puts several bullets into Murn, after which his pacifist Butterfly crawls out of his mouth — and gets squished/tossed aside by Song. When the cops leave the motel room, Harcourt and Adebayo race to find Murn dead and his Butterfly wheezing its last little breaths — but not before it said farewell to Harcourt with a touching of “hands.”

“It’s such a great scene,” recalls Jennifer Holland, who first played Harcourt in The Suicide Squad. “They did such a great job with the animation of Murn’s Butterfly reaching out to my hand, but I hated shooting that scene because I didn’t want to say goodbye! I want Chuck [Chukwudi Iwuji] to be a part of the series, if it ever goes on to be anything more, because even as a viewer I love watching him. He is such an incredible actor, so I’m sad to see Murn go.”

Elsewhere, Peacemaker ultimately found himself squaring off against the White Dragon, in the middle of the road. White Dragon gave his boy a licking and even knocked poor Eagly out cold. But Vigilante leaped onto the villain’s back and ripped at his costume’s circuitry, causing his gauntlets to short out. Peacemaker in turn gained the upper hand and pummeled his pop on the hood of a car. When Chris then grabbed a pistol and raised it to his dad’s unmasked head, Auggie sneered that the boy didn’t have the stones to pull the trigger. And yet Chris did, putting a bullet straight in the center of Auggie’s forehead. He then broke down sobbing, over what he was led to do. 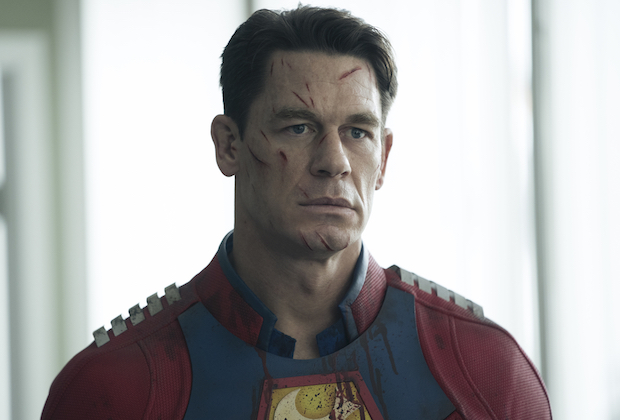 Later, Harcourt and Adebayo met up with the others at an animal hospital, where Chris waited to see if Eagly had survived surgery. Adebayo watched from the hallway window as Eagly slowly came to and then gave his owner the exact sort of big hug that, in the premiere, she scoffed was impossible.  Witnessing this “miracle,” Leota phoned her worried wife that she needed to see this mission through — but first, the team needed a new leader, picking Harcourt to full Murn’s shoes. 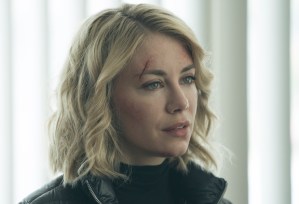 In that moment, “I don’t know that [Emilia] feels yet like she’s a team leader, but she’s definitely in a place now where she’s been stepping up and becoming a more integral part of the team,” says Holland.

“She’s also been accepting the fact that she’s not a lone wolf, that she has a team and that’s better than working alone, because I think that for the longest time she just thought, ‘Oh my God, these people are slowing me down,'” the actress continues, “But throughout the course of the series so far, she has really embraced being a part of a team — and she likes it.” 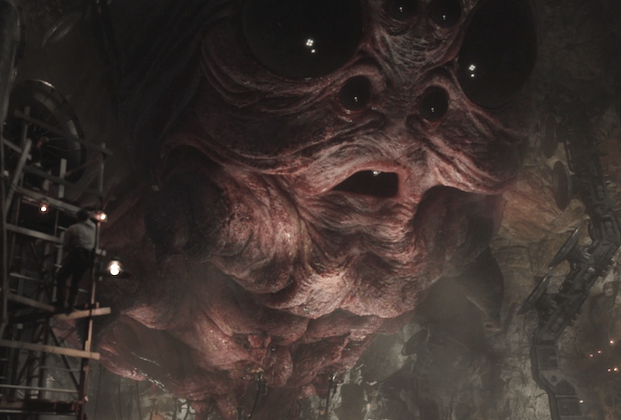 Harcourt’s first order of business as team leader, of course, is to lead a strategic assault on the remote farmhouse underneath of which is a gigantic cavern. And inside said cavern is the ginormous Butterfly “cow,” which is being rigorously “milked” of amber fluid/food.

For Team ARGUS, will it just be a matter of riddling the “cow” with every bullet they’ve got, before it gets teleported to a new secret location?