There is no denying the chemistry between Jazz and Des on Freeform’s collegiate comedy grown-ish.

But as fans saw this Thursday night, the problem was Jazz not accepting Des for who he is. The track runner asked Jazz to accompany him to the team’s formal dinner, and she said yes… but attempted to put restrictions and stipulations on the boy’s attire. Des wanted to wear a dress and Jazz wanted him to wear a tux, and he agreed at first… until he didn’t.

When he greeted her in a really fly belted black dress, neon green top and chain necklaces, Jazz — who looked equally stunning in a red, off-the-shoulder ball gown — scrunched up her nose and asked about the tuxedo. Des said he was going to wear it but didn’t feel like faking the funk. He also noticed that Jazz doesn’t have a problem with his bisexuality and gender fluidity unless he wants to wear a dress, skirt or something traditionally feminine. 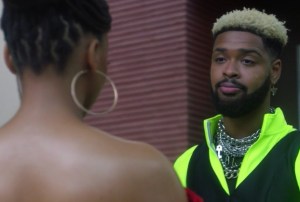 Des confessed that putting on what Jazz preferred took the amazing out of everything. He added that he doesn’t want to be with someone who doesn’t truly accept him. Jazz said she was working on her prejudices and Des challenged her by saying if she really wanted to do better, she would go with him to the banquet. Ultimately, Jazz just couldn’t get over her hang-ups and decided not to go.

Jazz wasn’t the only one who needed to get out of her own way. Nomi worked to make peace with Phil by allowing him to see their daughter Luna. And everything was going swimmingly until Phil took his eye off of Luna for one second to respond to a text, and she fell and bumped her head. Nomi overreacted, kicked Phil out and said he couldn’t see Luna anymore.

In truth, Nomi was less angry about Luna’s boo-boo and more upset with the fact that Phil wasn’t coming to their child’s second birthday party. But instead of saying that, she lashed out about the slip-and-fall. Phil came over to reason with Nomi the next day, and when Nomi turned her back, Luna started choking on a piece of broccoli and Phil had to step in and save her. 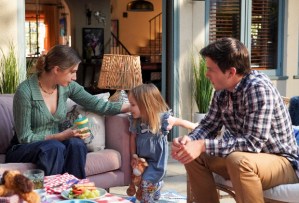 This is when Nomi realized she had been behaving irrationally. Phil also had some adjustments to make in order to support his little family. So he canceled his flight and came to the birthday bash.

He also rented an apartment closer to Nomi and Luna so he could see them both more often. Aww! Mazel!

Do you think Jazz and Des’ relationship stands a chance? What about Nomi, Phil and Luna? Drop your thoughts in the comments.