A drama-prone Karen told Aaron she’s pregnant on Tyler Perry’s Sistas this week, but it was unclear what she wanted in return.

She said she was telling him so Aaron would stop pursuing her. However, Aaron, who is in love with Karen, only seemed more inspired to pursue the woman of his dreams and swore that he would love the baby, too, even if it’s not his. Of course, Aaron admitted that if the baby is his, he will love the newborn even more, but none of this seemed to make Karen happy.

Aaron figured out once again that Karen is still in love with Zac, and he even questioned if her insistence that the baby is Zac’s is her way of keeping Zac in her life. Karen denied the accusation, but Aaron is more than likely right. The hairdresser also begged Aaron to stop being so kind and understanding, but he kept being compassionate and added that he will be there for Karen, no matter what. Perhaps it’s time for Karen to go to the doctor to figure out how far along she is and who the father is. Please go to the doctor, woman!

After Aaron left the salon, Karen and Preston talked about his confusing feelings for Danni. Preston confessed that he feels like he is too boring for Danni, and Karen said this was a conversation he needed to have with Danni, not her. Karen also asked Preston to stop using Tonya to make Danni jealous, especially if it meant bringing Tonya to the salon. Preston agreed and called Danni, who was none too happy to hear from him. 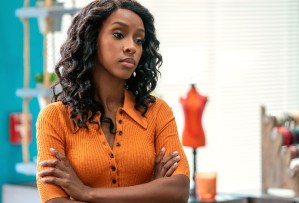 She had just cursed out El Fuego and the flirty undercover cop dude and was not in the mood to put up with Preston’s unsolicited call. Earlier that day, El Fuego accused Danni of being just as aloof with him as she was in college, and Danni didn’t deny it. Just like Karen, it’s super unclear what Danni actually wants. Does she want to be with Preston? If she doesn’t, why would she have him come over to her place after she got off work?

And when he got there, she was mean to him, too, and said that she couldn’t give him guidance in their relationship. A dejected Preston left, and Danni got ready to go to Andi’s to hear Karen’s news, which was so fraught with drama that Karen even asked Andi to invite Fatima. 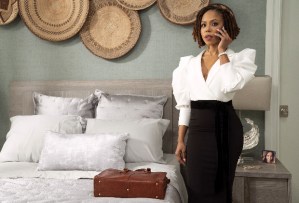 But why? Fatima already knows Karen is pregnant, and they’re not friends. Hopefully, Andi won’t invite Fatima after all. Besides, Fatima has her hands full with Zac because she needs to tell him what kind of man Gary is.

As Sistas fans know, Gary has become a stalker, and when Andi got home, all of her furniture was gone. Turns out Gary bought her the penthouse apartment in her building and had the items moved to the new place. That said, what’s going on with her old apartment? Does she own that, and will she take the penthouse? Andi is literally in the process of trying to sell the Rolls-Royce he gave her. Insanity.

How do you think Andi, Danni and Sabrina will respond to Karen’s baby-bump news, and do you think Fatima will show up, too? Should Andi move to the penthouse? Drop your thoughts in the comments.