Ahead of The Book of Boba Fett‘s season finale (now streaming on Disney+), TVLine posited a few questions. Among them:

Q: Where will the final showdown take place?
A: Though we feared it could be “a bit banal,” the firefight with the Pykes et al indeed took place in the streets of Mos Espa, starting outside the decimated Sanctuary and then spreading out. (But hey, better than at the palace!)

Q: Will any Tuskens resurface for the final fight?
A: In the flesh, no; in spirit, yes, as bounty hunter Cad Bane gleefully taunted his old friend Boba with the fact that the Pykes, and not any mere Nikto bikers, had led that years-ago slaughter.

Q: Will Boba get to ride his Rancor?
A: Damn straight he did!

Q: Will Grogu’s decision be revealed in the Boba Fett finale?
A: Yes — and, a bit surprisingly, very early on, “rocking his new armor” and all.

Q: Will Cobb Vanth be healthy enough to help Boba?
A: Alas, no; but the people of Freetown did show up bigtime. As for Vanth himself… he was seen in an end credits scene, recuperating in Boba’s Bacta tank while the mod parlor boss prepared to do some work….

All told, the Boba Fett finale was serviceable and certainly breathless for much of its 53-minute running time, though it delivered very few surprises (and certainly not a somewhat-speculated, but what would have been quite inexplicable, de-aged cameo). It opened with Boba, Fennec, Mando and the mods surveying the blown-up Sanctuary, then arguing a bit about where they should hold up until the reinforcements from Freetown, promised by an oblivious Mando, arrive. (Boba says fortified palace; the mods say to stay put and not abandon the commonfolk.)

We then see Cad Bane mosey into Mos Eisley to report back to the Pyke boss that the threat of any backup from Freetown has been neutralized; as for any Tuskens getting drawn into the fight, Bane also learns that the Pyke boss had ordered the years-ago slaughter of Boba’s found family, so they were a non-issue. 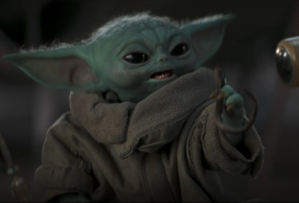 Then, just five minutes into it, Luke Skywalker’s X-wing plops down in Peli Motto’s garage, piloted by R2 and with Grogu alone seated in the cockpit. Peli excitedly welcomes back the “kid,” takes notice of its fancy Beskar mail, and quickly gets some dung worms into his hungry belly.

Back outside the Sanctuary, Cad Bane stares down Boba, each flanked by backup shooters. Boba cops to the fact that while Bane may be older, he is still probably a quicker draw. When Boba demands to negotiate only with the Pyke boss, Bane baits him with the bombshell that the Pykes killed his Tusken family. Boba is tempted to get into a shootout, but Fennec manages to calm him. Boba instead declares that “negotiations are terminated,” and a disappointed Bane saunters away.

From there, the finale was pretty much non-stop firefights, as it became clear to the mods (who were patrolling the workers/Aqualish district), Krrsantan (monitoring Trandoshan territory) and the Gamorrean guards (standing post at the starport in Klatooinian territory) that all three crime families in fact were not staying neutral, but siding with the Pykes.

In other words: It’s a trap!

I won’t get into a play-by-play, but Boba & Co. were grossly outnumbered to start, blindsided by unforeseen adversaries in every street and with no Freetown backup to speak of. (On top of that, the highly questionable decision was made to dispatch master assassin Fennec Shand to Mos Eisley for almost all of the remaining episode, to find the Pyke boss and cut the head off the proverbial snake.)

The mayor’s majordomo, boasting of his education on Coruscant, suggested to Boba and Mando that he handle a negotiation; Boba agreed and sent him out with a list of concessions, which were revealed to be… “nothing.” Boba and Mando used the distraction to drop in from the sky on jetpacks, floating above and gunning down the first Pyke forces. But the Pykes kept on coming. Worse, just as they seemed to have been effectively mowed down (thanks to a big assist from Freetown’s arriving Weequay and some of his townsfolk), giant Scorpenek annihilator droids stomped onto the scene, protected by energy shields. Blasters were useless, and kinetic weapons such as the Darksaber moved to fast to be effective.

Boba at one point flew off, during which time Peli Motto pulled up in a droid-led rickshaw and revealed that she had Grogu in tow — and Grogu promptly leaped into Mando’s arms for a hug. The sweet reunion was cut short by the incessant Scorpenek threat, until Boba returned, triumphantly riding his Rancor, which with its size and strength and resilience was able to shove the Scorpeneks around a bit. The Rancor toppled one, while Mando used the Darksaber to “carve” his way past a second one’s force field and get to slicing off its limbs. Mando, however, wound up pinned down by said Scorpenek, until Grogu used the Force to yank a bolt from one of its joints, sending it toppling. The Rancor tore that wobbly Scorpenek up, and then slugged it out with the third, while taking some nasty stabs from the droid’s talons. The Rancor ultimately jabbed a thumb in its “eye” and ripped it apart, limb after limb.

It then boiled down to a showdown on Main Street between Boba and Cad Bane, the latter of whom proved to very much be the quicker draw. He put several blaster bolts into Boba and stood above his old frenemy poised for a killshot… when Boba gained the upper hand with a swift strike by his gaffi stick, which he wound up driving down and into a felled Bane.

The problems were not quite over, yet, as the Rancor — spooked earlier, Frankenstein’s monster-like, by flames shot at it by Bane — began blindly rampaging. But just as the Rancor went to make a meal out of Mando (thank Beskar for that helmet!), Grogu used the Force to lull the beast into a nap.

In the aftermath, Boba strolled the streets of Mos Espa, where he and Fennec (back from assassinating Mos Espa’s mayor and the Pyke boss) were greeted by many a bow from thankful citizens. Mando meanwhile was already back in his starfighter, where Grogu from his passenger bubble repeatedly, and successfully, nagged him to leap into thrilling hyperspace.

Then, as noted above, an end credits scene revealed that Boba’s Bacta tank was “busy” reviving Cobb Vanth, as the mod parlor boss waited to do some work….

What did you think of Boba Fett‘s finale and the season as a whole? And what sort of adventures do you think await the Din and Grogu in Mandalorian Season 3?