Shonda Rhimes already made her Netflix debut with Bridgerton, but her new true crime drama Inventing Anna — debuting this Friday; I’ve seen the first four episodes — feels even more Shonda-y than that. (She’s the series creator this time and wrote the pilot.) It’s a brisk, glamorous crime story that bears several of Rhimes’ hallmarks, along with several Scandal alums in the cast. It’s maybe too glamorous at times and does suffer a bit from streaming bloat, but it’s an engaging watch, powered by a ferociously weird, utterly fascinating lead performance from Julia Garner. 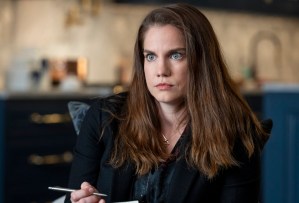 She plays infamous con artist Anna Delvey, a fake German heiress charged with scamming big money out of New York City’s elite upper crust. We learn the depths of her deception thanks to the intrepid reporting of Vivian (Veep‘s Anna Chlumsky), a pregnant journalist who knows there’s a story here and hits the pavement hoping for an exclusive interview with Anna. After a few prison visits while she awaits trial, Anna starts confiding in Vivian, claiming she’s innocent, and unspools the twisted tale of how she infiltrated the highest of high society just on charm and bluster.

It’s a great story, and in Garner’s hands, Anna is an instantly great TV character: a charismatic villain and a shape-shifting chameleon, adapting to whatever room she’s in. She’s blunt, bordering on rude (she asks Vivian, “Are you pregnant, or are you just so very, very fat?”), and endlessly obsessed with status. (She can’t understand why Vivian won’t apply for a media prison visit: “It’s VIP.”) Her accent is as over the top as she is: a snooty, affected creation that’s half German, half Russian and all vocal fry. She spouts off brash one-liners like “Anna Delvey is a masterpiece, bitches!” It’s a risky choice for Garner, an impressive young actor who already has two Emmys on her mantel from Ozark, but it pays off. She’s mesmerizing, and she singlehandedly makes this series worth watching with a performance that’s destined to be parodied and imitated for years to come. 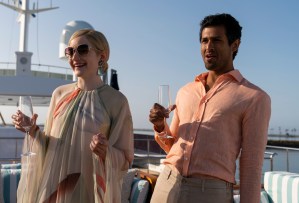 The flashbacks to Anna’s glory days have a seductive, glitzy energy, as she happily uses other people’s money to lounge around on yachts, jet off to Ibiza and sip Champagne in nightclubs and art galleries. Through them, we meet Anna’s associates/stepping stones, including her tech developer boyfriend Chase (What/If‘s Saamer Usmani) and old money socialite Nora (Rhimes regular Kate Burton, who’s joined by Scandal vets Jeff Perry and Katie Lowes). The obscene displays of wealth are intoxicating, and even Vivian gets caught up in it. The series is surprisingly sympathetic to Anna, too, painting her at times as a #YasQueen girl boss — even as it shows she’s also a liar and a thief. She bluffs her way onto a private jet without paying and even disguises her voice (!) to pose as a German financier verifying her vast family wealth.

Scandal fans will recognize Rhimes’ signature verve and crackle in all of this: the pulsing soundtrack (one song’s chorus is actually “Manifest that s—t”), the cast full of hot young professionals and the combative dialogue that almost qualifies as a sport. Inventing Anna also serves as a love letter to old-fashioned, boots-on-the-ground journalism, with Vivian doggedly chasing down leads and hitting frustrating dead ends. It’s almost a tabloid version of All the President’s Men, updated for the social media age; instead of just working the phones, Vivian tracks Anna’s movements through her Instagram posts. But don’t worry: She still has an old-school conspiracy board, with string on it and everything. 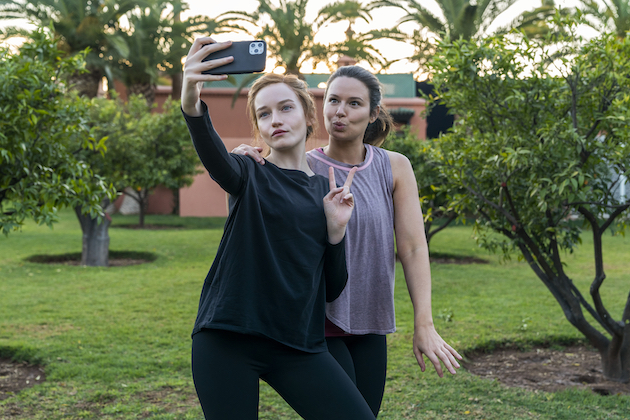 Like Anna herself, though, Inventing Anna becomes a victim of its own excess. The episodes are all at least an hour long, some topping 75 or 80 minutes, and the narrative gets bloated at times, with too many side characters fighting for attention. (The legal scenes are pedestrian and sluggish, but at least it’s fun to see Succession‘s Arian Moayed, aka Stewy, as Anna’s defense attorney — and married to his Succession costar Caitlin FitzGerald.) In fact, any time Garner’s Anna is off screen, the series loses a bit of steam. I suppose it’s inevitable that a story about a phony heiress feels a little hollow… but it’s a fun ride while it lasts.

THE TVLINE BOTTOM LINE: Inventing Anna brings the Anna Delvey saga to life in a glitzy, Shonda-y crime story with a great performance from Julia Garner.