Secrets of Sulphur Springs‘ Harper, Griffin and Savannah will keep delighting fans with their adventures in time travel because Disney Channel has renewed the sci-fi tween drama for Season 3.

In case you haven’t checked it out, Secrets of Sulphur Springs often garners comparisons to Netflix’s Stranger Things as it follows friends Griffin (played by Preston Oliver) and Harper (Kyliegh Curran) as they tap into the power of a portal that allows them to travel back in time. During their jaunts to the past, the pair solve mysteries and uncover clues about New Orleans and the Tremont Hotel that Griffin’s family purchased and lives in while they return it to its original splendor in hopes of making the hotel a tourist destination once again.

In Season 1, Griffin and Harper found and befriended Savannah (Swamp Thing‘s Elle Graham), a girl who had disappeared decades prior. Season 2, which is currently unfolding Fridays at 8/7c, has taken Griffin, Harper and Savannah back to the 1930s and 1960s to learn more about Harper’s family’s deep-seated connection to the hotel. 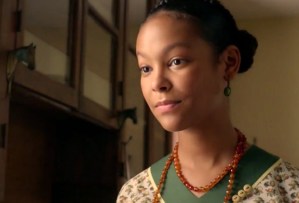 This includes Harper meeting a tween-version of her grandmother Daisy, who looks just like her because Curran is playing both roles. Queen Sugar’s Ethan Hutchison joined the cast in Season 2 as Daisy’s brother Sam.

In Season 3, a spooky new ghost will torment the Tremont. The time travel will also shift forward as Griffin ventures to the future and then back to his present to change the timelines of his and Harper’s lives in order to save their friendship and their families.

Are you excited about Secrets of Sulphur Springs Season 3? Drop your thoughts in the comments.