Oh what, you thought TNT’s gaudy crime drama Claws would go out with a quiet, restrained series finale? Have you even been paying attention?

Claws did everything big, and Sunday’s series finale was no exception, naturally. But first, a quick catch-up: Polly inherited a big fat inheritance from her late husband, the Baron; Dean is having a baby with an older woman named Eve; Desna kicked Quiet Ann out of the crew, and now Ann is working with the feds; Jenn got hooked on painkillers and lost custody of her kids; Desna was dating an undercover DEA agent named Tony, who was then shot dead by Bryce; and just last week, Desna shot her longtime nemesis Uncle Daddy in the head. Got all that? Good.

With Uncle Daddy’s body still warm, Desna works on covering her tracks, with Polly forging a flowery suicide note. Then Desna disappears to get everything set up for the crew’s escape to Cuba. Jenn won’t go, though; she can’t abandon her kids like that. She shares a tearful goodbye hug with Polly, who assures her: “You are the only white trash ho that I will ever love.” (Aw!) But money solves everything: Polly shows up at the guardian of Jenn’s kids with a sack full of cash, and once she has the kids in tow, Jenn and Bryce are in for Cuba. The nail crew stays together! 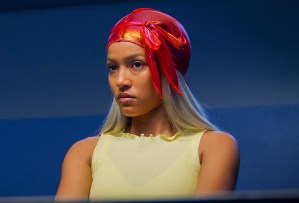 Well, maybe not: The cops bust down Virginia’s door and arrest her for Georgia’s murder. (Which, to be fair, she did do.) The crew’s plan is still on as long as Virginia stays strong and doesn’t confess… but Virginia crumbles under interrogation and admits to everything. She tells Ann during a tearful prison visit that she was just trying to be accepted by the nail crew. But all is not lost: Dr. Ken poses as an ICE agent and gets Virginia released to his custody — how? Yeah, best not to think too hard about things like this on Claws — and Jenn tells Virginia what she’s always wanted to hear: “You are part of the crew.”

After Desna says goodbye to Dean in an emotional phone call (and Polly gives Dr. Ken his own medical center as a farewell gift), it’s time to get out of Dodge. The DEA thinks Desna is pulling off a big heroin deal, but Ann rats her out and tells them she’s actually heading to the docks to catch a boat — and Ann loads up that boat with a whole lot of dynamite. Desna confronts her old friend, and their standoff turns into a shootout, with Desna shooting Ann in the chest. Ann falls back into the water, where Desna tells her to “say hi to Arlene for me… bitch” before adding another bullet to finish her off.

Desna hurries onto the boat with Jenn, Bryce and the kids, and they speed away just as the DEA gets to the dock… but then we see the boat explode in a fireball. Oh no! Did the nail crew’s dream of freedom just go up in flames? We flash forward two months: The nail salon has been seized, and we get a sad montage of the nail crew’s greatest hits. Dean is still reeling from his sister’s apparent death, but then he gets a mysterious cassette tape: It’s Desna, explaining that the rift with Quiet Ann was all a ruse to throw off the authorities. They secretly patched things up and hatched an escape plan, employing Navy SEALs, special effects artists (!) and magicians (!!) to pull off the phony shooting of Ann and a fake boat explosion. 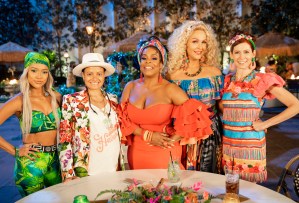 And somewhere in Havana, the whole nail crew (plus Bryce) is alive and well, enjoying a laugh and a cocktail at an outdoor bar. (Polly: “It’s not my first time, but ain’t it fun being dead?”) They reminisce about all of their past adventures, and Desna tears up thinking about all the superficial things she’s been chasing for years. Now she realizes: “Y’all are what is important.” They put their hands in for one final finger shimmy — and hey, Quiet Ann’s water just broke! Looks like the nail crew is getting a new addition.

How’d you like that finale, Claws fans? Grade it in our poll, and share your thoughts in the comments.