It’s a good thing Sweet Magnolias‘ second season isn’t streaming simultaneously around the world, or else the collective gasp from fans during Episode 9 would instantly deplete its oxygen supply. 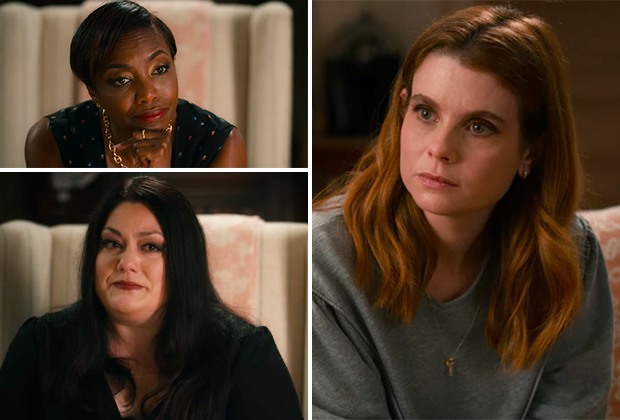 The show made us wait long enough, so we won’t beat around the bush any further: Bill. Is. Isaac’s. Father. It’s a jaw-dropping reveal that will shake up countless lives, which only makes it more impressive that showrunner Sheryl J. Anderson has been keeping this secret for years.

“We made that decision in the writers’ room at the beginning of Season 1,” Anderson tells TVLine. “We knew who Isaac was when we brought him to town. We wanted to see him searching for answers, but we also wanted to use that search as a way to shed new light on the paths that other people were on.”

The show’s stars figured out early on that Peggy Martin (played by Brittany L. Smith) was Isaac’s mother, but none of them saw the Bill twist coming.

The possibility of Bill being Isaac’s father didn’t even cross Heather Headley’s mind because, as she says, “He couldn’t be this deep in the poo.” She recalls several of her co-stars guessing that Ryan (Michael Shenefelt) was the father in question, “But I was like, ‘It better not be Ryan! I’m fighting someone if it’s Ryan!'” She says someone even thought it might be Ronnie.

Of course, no one has a bigger reaction to the news than Maddie, who unleashes the full force of her fury on Bill in the finale.

“That scene with us at the end when I find out is such a pivotal moment for Maddie,” JoAnna Garcia Swisher says. “It’s a lot. And she finds that out at the end of the season, so it’s not even really resolved on any level. No one else knows. Season 3 is, like, here we go!”

For Anderson, since so much of this season was about people learning from their mistakes, she wanted to explore someone who falls on the opposite side of the ledger. “Bill doesn’t learn from his mistakes, so he keeps making them,” she says. “He might not even recognize them as mistakes. It’s the people who stop and reflect and desire to change who make the best choices. Bill was raised to be a golden boy. Everything he did was good and right and wonderful, so the lesson in responsibility and humility that he has to absorb is an interesting journey for a guy like that.”

Was your mind blown by the Bill reveal, or did you already put that one together? (And don’t lie!) Vote in our poll below, then drop a comment with more of your thoughts.