Prime Video this Friday released all eight episodes of Reacher, its adaptation of Lee Child’s first novel featuring the Jack Reacher character. How did the very first episode measure up for you?

The series premiere, titled “Welcome to Margrave,” opened with the murky and somewhat-sloppy nighttime disposal of a dead body. Come daylight, we see Jack Reacher (played by Titans‘ Alan Ritchson) moseying down a quiet highway toward the titular Margrave, Ga., where no sooner than he orders a diner’s slice of the best peach pie anywhere, he is surrounded by local LEOs and hauled in for murder.

Bound by zip ties (since standard cuffs don’t fit this “6-foot-5” mountain of a man), Reacher is hauled to the cop shop, where it is discovered that all he has on him is a wad of cash and a French war medal. Chief Detective Oscar Finlay (iZombie‘s Malcolm Goodwin) steps in and pulls Reacher aside for questioning, revealing that the murdered, yet-to-be-ID’d John Doe had taken two gunshots to the head before being beaten post mortem and lazily covered up with a too-small piece of debris. Hearing that he matches the description of someone spotted near the crime scene, Reacher breaks his silence to say he doesn’t need a lawyer, because “I didn’t kill anybody — at least not recently, and not in this town.” Meanwhile, Officer Roscoe Conklin (Willa Fitzgerald of TV’s Scream, and not Million Little Things‘ Allison Miller) discovers that Reacher has no online footprint, social or otherwise — the only sign he exists is the fact he is sitting in the next room!

Finlay recounts Reacher’s impressive military credentials, including his stint as an Army Special Investigator. Demonstrating said skills, Reacher observes that the John Doe was done in by no fewer than three men — a pro who knew how to pull off a quiet kill, the psycho who beat him after, and the lazy one who poorly covered up the corpse. Reacher also maintains that he at the time was aboard a bus from Tampa to Margrave, to visit the onetime home of blues musician Blind Blake.

As Finlay gets to checking Reacher’s alibi (as well as running a phone number found on a slip of paper inside the John Doe’s shoe), Reacher flashes back to his childhood, where he and his brother Joe were in the midst of settling into their latest home as Army brats when they ran into local bullies. Jack spoils for a fight and Joe offers to help, noting, “It’s never just your fight” as well as the fact that, as their mom often tells Reacher, “Trouble does find you.” 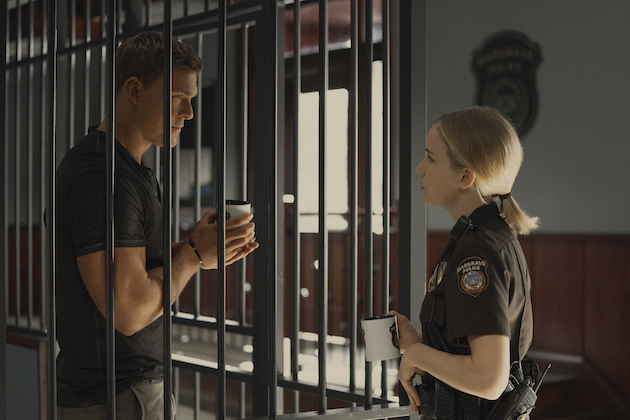 With Reacher put behind bars for now, Roscoe (Officer Conklin) kindly brings him some coffee, until Finlay pulls Roscoe to go question the owner of the found phone number: Paul Hubble, a mild-mannered money guy who when interviewed at home pretty quickly confesses to the murder, after anxiously clocking an ominous car parked outside. Finlay is taken aback, especially when he tricks Hubble into “confirming” entirely false murder details. Returning to the police station with Hubble, Finlay leads Reacher outside for a chat, first noting that Hubble’s clearly false confession doesn’t clear the town’s visiting giant. Reacher suggests that Officer Stevenson knows more about Hubble than he is saying, and Finlay asks on what that is possibly based. Brandishing his superpower of observation, Reacher ventures that Finlay is a Harvard grad, is recently divorced, and quit smoking in the past six months — and then rattles off the clues and microexpressions that led him to that (mostly) accurate assessment.

Sure enough, Stevenson when asked tells Finlay that he and his missus were out with the Hubbles the night prior and then drove the other couple home, meaning Paul was nowhere near the highway around midnight. Stevenson also confirms that Hubble has no drug or money problems, ruling out the other usual motives for murder. Finlay suggests that a weekend in lockup might motivate Hubble to ‘fess up about his false confession — and Reacher apparently will tag along!

Arriving at the jailhouse, Reacher denies a strip search (rattling off his legal standing to do so). He and Hubble are then “accidentally” put with the lifers, Reacher observes; soon enough, one comes to their cell to seize Hubble’s shoes and glasses. But before the inmate, about to lower his pants, can demand more, Reacher drops down from his bunk and puts a stop to the shakedown.  Reacher gives the inmate to “the count of 3” to clear out, only to swiftly and decidedly whale on him after “one.” Later that day in the yard, Hubble laments to Reacher that he is in “big trouble,” that he is not a criminal per se but got roped into helping with someone’s financial scheme. He only complied under the threat of being literally nailed to a wall (…and worse…) as his family watches. Reacher decides to hit the loo (and Hubble tags along), where they are promptly surrounded by several inmates. Reacher again does the “count of 3” thing, and again cuts his countdown short to pummel each and every one of his attackers. He and Hubble are then whisked away from the scene by a guard who was shocked to see them not in gen pop.

Back at the cop shop, Roscoe briefs Finlay on Reacher’s military record, including 150 closed investigations (with 20-plus captures) and how in Afghanistan he saved 12 guys, despite having someone’s jawbone shrapnel lodged in his abdomen. Later, Roscoe shows up outside lockup to offer Reacher a ride back to town, and along the way shares with him the security cam footage from the bus that supports his alibi. Roscoe suggests they meet up for an early dinner, but Reacher first needs to grab some clean threads from a thrift store. He then goes for a shave from a local barber, from whom he gets a crash course in Margrave’s power players — most notably, Mayor Teale (Bruce McGill) and Kliners Sr. (Currie Graham) and Jr. aka KJ, whose corporation pours money into the quiet burg.

Speak of the devil, KJ is waiting outside the barber shop. Reacher walks up to the smarmy blonde and brushes off his pit bull pal Dawson. KJ alludes to charges of a “very serious nature” that were made against Reacher in the war zone, and how they mysteriously “disappeared like grains of sand in an unforgiving desert.” KJ then warns the visiting hulk, “Watch your back, Mr. Reacher.”

Reacher hoofs it back to the cop shop, which is in a small state of crisis given that a second dead body has been found near the first. Finlay talks to Reacher of how he might still have something to do with the murders, and how the grainy bus footage ostensibly could be of someone else. In other words: take a trip with us to the morgue and help out, or go back into lockup. At the morgue, M.E. Jasper (Harvey Guillén) notes how the first John Doe’s fingertips could not yet be printed, swollen as they were by an allergic reaction. Reacher grabs Jasper’s monitor to take a closer look, and observes that the deceased had an allergic reaction to the latex of the killers’ protective suits. He also rattles off some more medical history, before asking to see the body itself — at which point Reacher confirms that “John Doe” is in fact his brother, Joe.

Back in the police cruiser with Finlay and Roscoe, Reacher wonders if his brother had bated him to come to Margrave by planting the seed about blues musician Blind Blake. When Reacher surmises that he is supposed to “do something” about all that has transpired, Finlay asks, “Like what?”

“I guess I’ll find everyone everybody responsible,” Reacher coolly answers, “and kill every last one of them.”

How much you wanna bet he will?