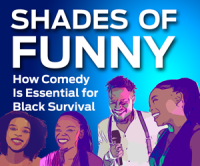 Even if you’ve never heard of Phat Tuesdays, a night at The Comedy Store in Hollywood where various Black comedians got a chance to shine and get discovered, many of the names that graced the stage are well-known.

Stars such as Cedric the Entertainer, Nick Cannon, Tiffany Haddish, Chris Tucker, Dave Chappelle and more got their big breaks on that night, thanks to comedian and founder Guy Torry, who created a showcase for rising Black comedy stars back in the 1990s. His journey to The Comedy Store and all the good, bad and ugly that happened afterward is fascinatingly captured in the Prime Video three-part docuseries Phat Tuesdays: The Era of Hip Hop Comedy, which is now streaming.

In addition to chronicling how the Comedy Act Theatre, in Los Angeles’ Crenshaw District, paved the way for HBO’s Def Comedy Jam, which then created a desire and need for Phat Tuesdays, the film series also pays tribute to the late, great Robin Harris. He’s the bawdy and boisterous Chicago native who took Black comedy audiences by storm with his brilliant bit “Bebe’s Kids.” Harris died of a heart attack in his sleep at the age of 36. 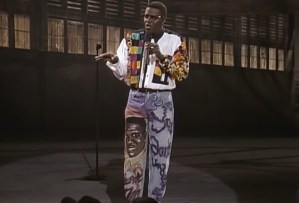 Phat Tuesdays also honors Bernie Mac, who, like Harris, hailed from Chicago. In one of the docuseries’ best moments, Mac is shown making his debut on Def Comedy Jam in 1992.

Fans may remember his airbrushed jeans and unflinching delivery, but it’s fellow comedian Bill Bellamy who explains the backstory on Mac coming onstage after the comedian before him — who was never shown on-camera — bombed terribly. And that’s why Mac kept saying, “You don’t understand. I ain’t scared of you motherf–kers,” because as Tucker also explains, Mac truly was fearless.

The comedian, who would go on to become a household name, thanks to the concert film The Kings of Comedy in 2000 and the Fox sitcom The Bernie Mac Show (2001-06), died from sarcoidosis complications in 2008 at just 50 years old.

Those two tributes were touching, but somewhat expected. What was unexpected was the way Phat Tuesdays pays homage to Bob Saget, who is described as a foul-mouthed white ally who loved intrepidly performing in front of Black crowds. Saget, who starred on Full House and its Netflix sequel Fuller House, died in January. He was 65.

Are you going to watch Phat Tuesdays for all its history, tributes and hot comedy tea? Drop your thoughts in the comments.