In a first teaser trailer for The Last Days of Ptolemy Grey, the titular character (played by Samuel L. Jackson) is reminded to be careful what you wish for, as he seeks out a miraculous memory cure.

Jackson stars as Ptolemy Grey, an ailing man tossed aside by his family and friends so cruelly, even he begins to neglect himself and his cluttered and crumbling home. Lonely and struggling with dementia, Ptolemy suddenly finds himself in the trusted care of an orphaned teenager named Robyn, (The Deuce’s Dominique Fishback), who starts out as a glorified babysitter but becomes almost a surrogate grandchild.

As seen in the trailer above, Robyn takes Ptolemy to an experimental and non-traditional doctor (Justified‘s Walton Goggins), and it is there that the older adult must decide if it is worth the risk to undergo a “miracle” procedure that would restore his recollection abilities all at once, only to perhaps later strip them away completely.

When Ptolemy and Robyn discover the treatment could restore long-lost memories, the temporary cure jumpstarts a journey toward ugly truths about Ptolemy’s past, present and future — including his deceased uncle’s stolen treasure and a dramatic house fire. 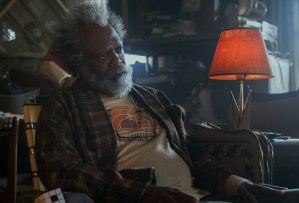 As he has in a number of films, Jackson physically immerses himself into the character by using wigs and aging prosthetics. He also delivers folksy and wise comments such as, “You got to let the river take its course. And the river know right where it’s going.”

Based on the eponymous and acclaimed novel by Walter Mosley — who executive-produces alongside Jackson — the six-episode series will premiere Friday, March 11 with the first two installments, followed by a new release every Friday.

Are you excited to tune into The Last Days of Ptolemy Grey? Check out the trailer above and drop your thoughts in the comments.