Four strong, diverse designers remained atop Thursday’s Project Runway finale, and all that stood between them and victory was a little thing called New York Fashion Week.

The two-hour season ender began with Christian Siriano visiting each of the remaining contestants — Chasity Sereal, Coral Castillo, Kristina Kharlashkina and Shantall Lacayo — for a sneak peek at their final collections, as well as to dispense his last pearls of wisdom.

He warned Lacayo against experimenting with 1980s Easter colors during his trip to Miami; he encouraged Sereal through her designer’s block in Houston; he received a metaphorical tour of Mexico City from Castillo in Los Angeles, as well as a literal tour of her personal at-home jungle; and he learned a lesson on what is and is not a poppy from Kharlashkina in Queens. Overall, it was a very eventful tour.

But the biggest event, of course, was still to come. A three-month time jump brought all four women back together in New York City for the most important fashion show of their lives. (No pressure, though!) And although Elaine Welteroth couldn’t join Nina Garcia and Brandon Maxwell on the judges’ panel, Runway found a fairly qualified replacement in none other than Tommy Hilfiger.

Kharlashkina kicked off the show with “Lead Me to Life,” a collection inspired by her personal journey of overcoming insecurities and learning to believe in herself, whose flowery motif was meant to convey that “tears can blossom into something really beautiful.” Up next, Lacayo presented “Herencia” (“Heritage”), a “wearable but unique” collection that drew inspiration from the feathered serpent deity Quetzalcoatl.

Sereal also looked to her past for “Rebellious Reflection,” a collection which told the story of a “black sheep that blossomed.” And Castillo closed out the show with “Genesis,” a parade of strong, vibrant colors inspired by the unique hand embroidery employed in Mexican garments.

Four strong showings, no doubt, but only one of these wildly different designers would be declared the winner. 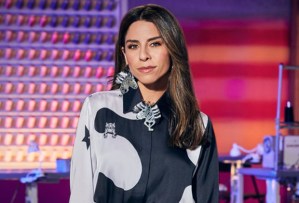 “We believe the winner has everything it takes to be a household name, and has a brand that can carry on for years to come,” Garcia told the four women after the judges’ deliberations. And that designer is… Shantall Lacayo!

“I’ve dreamed about this moment for so long,” Lacayo said through tears. “It’s not just about me winning this competition. It’s about my family winning this competition. I can’t believe it. So many doors that have closed, you know?” She recalled hearing critiques about being “too colorful, too Latin, too loud,” and how all she was looking for was “recognition as an artist.” She finally feels seen.

Your thoughts on the Project Runway finale? Vote in our poll below, then drop a comment with your full review.