The following contains spoilers from the Feb. 3 episode of HBO Max’s Peacemaker.

HBO Max’s Peacemaker this week shed light on the nature of the Butterflies (including the one inside of team leader Clemson Murn), then built to a chilling sequence that very much set the stage for the season’s final two episodes.

To recap: Just as Adebayo feared what Butterfly Murn would do upon catching up to her in the parking lot, Harcourt stepped out of the shadows to very calmly A) worry how Peacemaker will react to someone toying with his X-ray helmet but also B) explain that she has known Murn’s secret. (Harcourt had suspected as much, given how Murn always seemed to know more about Butterflies than were in any files, and then had her theory confirmed when he survived the explosion at the Goff home.) Economos also knows, but sticks his fingers in his ears, literally, if you try to talk to him about it.

Murn explained to Adebayo that the Butterflies didn’t originally mean any harm upon arriving on Earth, until a faction led by the one that nested inside of Senator Goff decided to get greedy and lead an effort to take over politicians and other humans in positions of power.

In other words, “There’s a faction amongst the Butterflies who want to end humankind — and me,” Chukwudi Iwuji, who plays Murn, said to TVLine in character.

The only recourse the team has is to cut off the food source — the origin of the amber goo that Butterflies feed on, aka “The Cow” — and to that end, Economos used traffic cams to backtrack the larger container deliveries to a remote barn.

Is there any guessing what this “cow” that generated the aliens’ amber goo will look like? “Oh my God…. I can guarantee that if from now until the episode airs, you ran through ideas, pictures and diagrams, you probably wouldn’t nail it,” Iwuji said with a hearty laugh. “It is quite out there!” 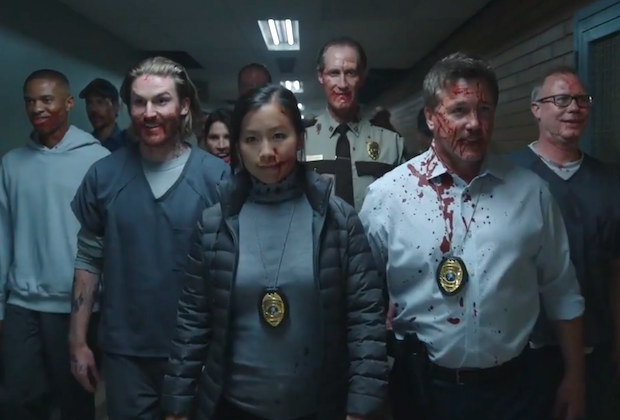 As the episode neared its end — in a rousing montage set to Reckless Love’s “Monster” — we saw Detective Song summon a legion of Butterfly ships and then lead her fellow ETs to the cop shop, where they infested every LEO (Fitzgibbons and Locke included) as well as anyone who had been jailed up (including some of Auggie’s white supremacist pals).

But wait, hadn’t the Goff Butterfly earlier spoken of “peace” in a way, when it scrawled that symbol in goo inside its jar…? “Oh, I really don’t want to spoil it for you…,” Iwuji said when asked about that seeming disconnect. “Let me just put it this way: in any healthy invasion, both sides are right, and both sides are wrong.”

Elsewhere in this delightful, earworm-causing montage, Auggie — having earlier vowed to belatedly kill his own son — was seen entering his home armory to suit up as The White Dragon, before whom several white-hooded minions bowed/saluted. 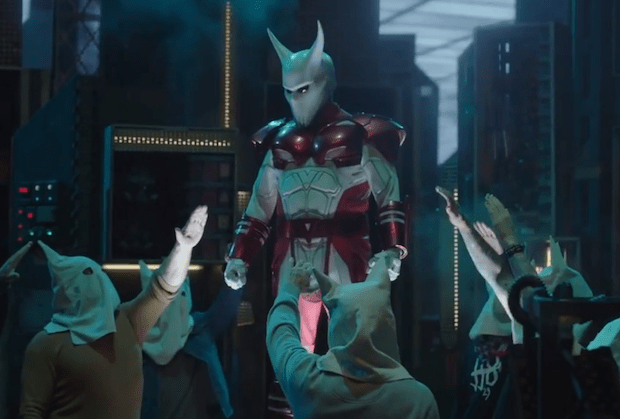 Iwuji, deeming costar Robert Patrick’s performance as deplorable Auggie to be no less than “absolutely brilliant,” says that The White Dragon is meant to serve as a stark contrast to the zanier, alien threat at hand.

“Let’s not forget that for all the fun that we’re having on Peacemaker, there’s a very serious theme at the heart of it, of how disparate this country has been getting with ‘the right versus the left’ and all that — and it’s embodied in Peacemaker and Adebayo,” Iwuji explained. “That’s why they’re the central relationship we’re watching grow in this series, and I think this will force everyone to understand the danger of extremism and the danger that someone like The White Dragon represents, because it’s not as far-fetched as you think it is.”

Further complicating matters for Murn’s team, on top of these two, very different, looming threats? Peacemaker — following a sweet moment with “Emilia” (who had a dove etched onto his P90) — was nudged to turn on the TV, where Butterfly Locke was giving a press conference about both the “diary” found in Peacemaker’s home (and the wild “alien invasion” theories rambled about therein) and the antihero’s connection to multiple murders. As a result, every police station across the country, Locke announced, now has the directive to find and stop Peacemaker — “by any means necessary.”

What did you think of Peacemaker Episode 6, “Murn After Reading”? And what was your favorite exchange from the Career Day classroom scene?