And Just Like That… Carrie has a new man in her life. (And it’s not the one we thought.)

HBO Max’s Sex and the City revival wrapped up its 10-episode run on Thursday with a big old twist: After sharing a lukewarm kiss with her date Peter, Carrie ended up in a passionate make-out session with Franklyn, her silver fox podcast producer. (We just knew he would play a bigger role at some point.) Carrie also said goodbye to her beloved Mr. Big by sprinkling his ashes at the Paris bridge where they reunited in the Sex and the City series finale. And that led to another surprise: She texted Samantha — who’s now in London, remember — to see if she wanted to meet for a cocktail. (When Samantha said, “How’s tomorrow night?” Carrie’s reply was perfect: “FABULOUS.”)

Elsewhere in the finale: Miranda’s rom-com fantasy with Che got a jolt when the comedian announced they’re moving to L.A. for a few months to shoot a TV pilot, and Miranda decided to turn down a prestigious internship to follow them to L.A. (she even dyed her hair red again!); Charlotte threw a “they mitzvah” for Rock, complete with a trans rabbi, but when Rock refused to go up and read, Charlotte did the Torah reading herself; and with Che gone, Carrie started her own podcast titled (naturally) Sex and the City.

With all these surprises, we turned to And Just Like That… writers Julie Rottenberg and Elisa Zuritsky (who co-wrote the finale with Michael Patrick King) for answers. Read on to get their take on Carrie’s last-minute love switch, her off-screen reunion with Samantha and the “very heated conversations” in the writers’ room about Miranda’s choices. 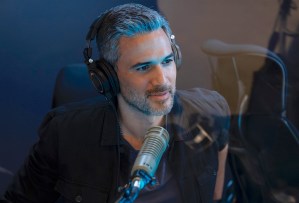 TVLINE | Let’s start at the end, with Carrie kissing Franklyn the podcast producer. Were you trying to lay down breadcrumbs about that earlier in the season, or did you want it to come as a surprise?
ROTTENBERG | Well, in fact, a number of very observant viewers have noticed that there was a particularly hot guy in the booth on the podcast. [Laughs] We were, in fact, leaving little breadcrumbs. We didn’t want them to be too big. We didn’t want to leave croutons. But we also really want to drive home the idea that she says in her last podcast, that “the future is unwritten,” and you never know when some great surprise [will happen]. It was very much a bookend to the kiss at the beginning of the episode, which she describes as lacking in surprise. We wanted to have a kiss that was very much a spontaneous, surprising, passionate kiss that did sort of come out of nowhere for her.

TVLINE | Carrie tried to make it work with Peter, but the chemistry didn’t seem to be there. Was it just a case of right time, wrong guy?
ZURITSKY | I think it’s open to interpretation. They’re both where they are in their lives, they both are still processing their grief. They clearly have interpersonal chemistry. Whether or not it’s sexual chemistry, I think everyone will have a different opinion about that. I think it’s really in the eye of the beholder what kind of future they might have together. Anything is possible when it comes to love. 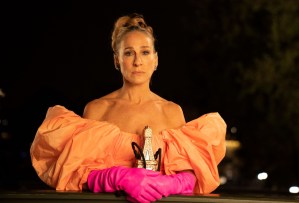 TVLINE | Carrie went back to Paris to scatter Big’s ashes. Did that give her the closure she was looking for?
ROTTENBERG | This whole season journey for her was working through her grief, and I think there’s a reason she hadn’t moved those ashes yet. She wasn’t ready to let them go. And that was really her giving herself permission to let him go, and obviously still keep him close, spiritually if not literally. But we liked that as a physical way to illustrate her journey.

TVLINE | Carrie’s orange dress with the pink gloves: Did that come from a previous season? I couldn’t remember if I had seen that before.
ROTTENBERG | I don’t think so. I think that was something really special and almost out of this world that they felt Carrie would really make it into something…

ZURITSKY | An event. That kind of high-level decision happens largely between Sarah Jessica [Parker] and [costume designer] Molly Rogers and her team. That is…

ROTTENBERG | Above our pay grade. Sometimes, we are very specific in the script [about what Carrie wears], and this time, we were not.

TVLINE | The trip also gave Carrie an opportunity to reconnect with Samantha. You managed to keep Samantha going as a character just through texts. Could we see that continue in a possible Season 2?
ZURITSKY | We all love the character of Samantha. We all loved their friendship and were just as invested in what they shared as friends over all these years as people at home were. So we loved keeping her alive, and keeping this flicker of love and hope and connection between these two friends felt very real to us. As women who have all had friends who have fallen away for any number of reasons, we all felt strongly that was a story we wanted to tell, and a story we hadn’t quite seen.

So in some ways, Kim Cattrall’s absence opened the door to that kind of connection, that kind of heartbreak between female friends. And could that continue? Yes. I do think it’s satisfying to see that they had a story arc this season. It feels healing to me as a viewer. I like knowing that they met up in Europe and had a cocktail and gave each other a hug. I like that they mended the relationship. That’s what I want to think.

ROTTENBERG | We felt like we’d earned the right by the end, especially after this big milestone of scattering his ashes, that [Carrie] has healed in one regard and felt courageous enough to reach out to another relationship that still needs healing. It did feel real. I was like, “What is Samantha going to say?!” 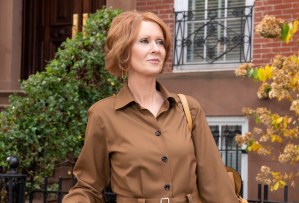 TVLINE | Miranda ended up heading to L.A. with Che. Is this a happy ending for her, or is this story just beginning?
ZURITSKY | I think it’s whatever you think it is. It could be the biggest mistake she ever made. It could be the greatest adventure she ever took. It could be a horrible betrayal of her role as a mother and a New Yorker. This is Miranda following her heart and not her head for the first time in her life.

ROTTENBERG | This was a topic of great debate, because I think the journey for Miranda started by giving this righteous speech about letting her hair go gray and then ended with her dying her hair back to red. We really had very heated conversations about what that would mean and what message that was sending. In the end, we decided the greatest liberation for Miranda would be to be allowed to question these things. As she says to Carrie, “Can I not change, and then change back again if I decide to?” Instead of following all these rigid rules, she made up all the rules for herself. Is she allowed to break those rules? And is she allowed to do a possibly crazy thing like give up an internship that she’s been working towards and instead do something purely based on emotion and love? We decided it’s not our place to judge the characters. They’re making decisions for themselves. So you could argue either side of it, and we like that there’s no clear answer for her. That was sort of a late-breaking decision we made, to end the season that way.

Give the finale a grade in our poll, and hit the comments to share your thoughts.