Fatima doesn’t suffer fools on Tyler Perry’s Sistas, and as fans saw this week, there was a lot of foolishness surrounding her.

The nonsense began when she arrived at work and greeted Andi in the parking garage. The two were having a good time until Hayden came waddling by on crutches. Fatima took one look at her obsessive co-worker and started laughing. Andi begged her to stop, but Fatima couldn’t help it. Angered by Fatima’s mocking chuckles, Hayden limped over and threatened Fatima, and she wasn’t having it.

Fatima informed him that the photos of his naked and battered body in her phone would guarantee his silence and respect, and if that didn’t work, she also had a bruise on her cheek. Andi chimed in and said she heard Hayden threaten Fatima, and an annoyed Hayden tried to get away from them both. Before he could, however, Fatima tripped him, and he lost part of the padding for his crutches. Hayden demanded that Fatima pick up the piece and bring it upstairs, but she didn’t. Instead, she just left it on the ground and kept cracking up along with Andi.

Once Fatima got to her desk, her cellphone rang, and it was Karen calling. Turns out Fatima had accidentally taken Zac’s phone, and he had grabbed hers by mistake. Karen rudely asked Fatima all sorts of questions, such as who she was, even though she knew. She even had the nerve to say Zac never goes anywhere without his phone, but Fatima got in a zinger when she informed Karen that he’s a different man with her, phone and all. 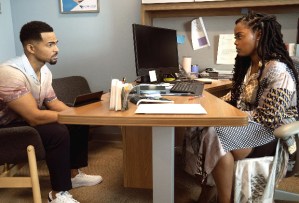 After a stunned and offended Karen hung up, Fatima called her phone, and Zac answered. When he learned of the mix-up, Zac gave Fatima a hard time because she had promised she would change her phone case to avoid this very faux pas. Fatima said Zac was right and apologized. She also got Zac to give her his passcode and started going through his phone but tricked her boyfriend by giving him a fake passcode, and Zac realized he would need to pick up his phone after all.

Elsewhere in Atlanta, Calvin stopped by the bank and apologized to Sabrina for fighting the man at the restaurant and causing a scene. Sabrina forgave him and admitted she understood why he had to fight because he wanted to show her he’s a real man. But Calvin corrected Sabrina and said he fought because the man had disrespected him and he would have done the same even if Sabrina wasn’t with him. Before he left, Calvin told Sabrina he loved her, but for some reason, she didn’t say it back. 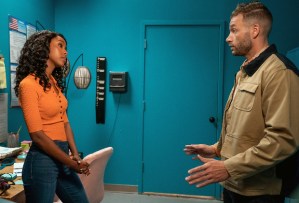 Over at Karen’s shop, the woman with the bad wig stopped by again looking for Zac. After she left, Pam said she was going to use the woman’s license plate to find out who she really was, and Karen thanked her. Finally, Pam is doing something helpful. Karen also had to contend with Preston and Tonya, who stopped by her salon again to fix Tonya’s hair because Preston had gotten it wet.

Annoyed by the memory of Danni’s anger, Karen took Preston into her office and asked him what he was up to and why he was really at the salon again. Preston said it really was about Tonya’s messed-up tresses and he didn’t want Karen to call Danni and tell her anything. Karen did tell Aaron about the pregnancy, finally, but we’ll have to wait and see how all of that ends up.

As for Danni, she had drama of her own because the sex trafficker wasn’t actually a criminal but an undercover cop. Danni, who told dude she was from Detroit as she shook a knife and threatened to stab him, didn’t believe him at first, but once she saw his badge and talked to him, she realized he really is an officer. And then dude tried to flirt with her, and the whole thing took an even weirder turn.

What did you think of Fatima’s last laughs, and do you think Hayden will finally leave her alone now? Drop your thoughts in the comments.