Two years, four specials and a whole pandemic later, South Park returned to Comedy Central on Wednesday for its long-awaited 25th season. And we just have one question: “What time is it? Pajama time!” Well, that and: “What is this, Nazi Germany?”

What began as a classic Three’s Company scenario — Mr. Garrison trying to casually date two guys at the same time without that “narcissistic psychopath” Marcus finding out about his new squeeze Rick — ended in tragedy when the kids refused to help him cover up his affair. As punishment for disobeying their teacher, who gives them everything he’s got (!!!), PC Principal did the unthinkable, canceling pajama day for their entire class.

“We keep not doing anything wrong, and we keep getting f—ed!” Cartman said, to which Butters depressingly suggested that it’s “just part of being a kid these days.” (Tragic!) But to quote Matt Damon’s ridiculous bitcoin commercial, “fortune favors the brave,” so the kids refused to back down. Unfortunately, PC Principal was also immovable, reminding the kids that it’s his job to make decisions and stand by them, eliciting cries of fascism. (“This whole school stinks like Nazis!”)

Mr. Mackey warned PC Principal against waging a war on Pajama Day (“It’s like the Met Gala for children!”), but he refused to risk looking weak by changing his mind. Fearing for her son’s safety if he went to school in regular clothes on Pajama Day (“He could die!”), Mrs. Cartman also challenged PC Principal on his decision, but she kinda-sorta went rogue and made the whole situation much worse.

Suddenly, all of the adults in South Park were wearing pajamas 24/7 in protest of the school’s fascist anti-PJ policy. It was now “Pajama Time” all the time, complete with a song that will undoubtedly remain on loop in all of our brains for the next few days. Go on, you know you want to listen:

But just like in real life, this obvious mask allegory — no matter how cozy-wozy or comfy-womfy it may have been — quickly spiraled out of control. A realtor was called a “redneck gun-toting piece of s—t” by one of his co-workers because he didn’t feel like wearing pajamas to work. And over at IHOP, patrons wouldn’t be seated unless they were wearing pajamas, prompting one of my favorite lines in recent memory: “So I have to be comfy-womfy to get a Rooty Tooty Fresh and Fruity?!”

A crisis meeting was called between the boys and girls, and after a few questionable suggestions — including Butters offering to shoot up the school, which Cartman only rejected because it’s been “done a lot” — they settled on Wendy’s plan to simply apologize to Mr. Garrison. Unfortunately, that proved easier said than done. When Mr. Garrison realized that the students weren’t paying attention to his update on the whole Rick/Marcus situation (“Does anyone know what I said when Rick held me tight?!”), he blew his top all over again. 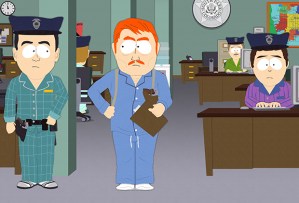 Pretty soon, the entire town was in shambles. And when Wendy confronted PC Principal on Pajama Day (against the muffled sounds of gunfire and screams), he finally broke down. He told her that he always wanted to be a principal because a principle is “something you see as a fundamental truth.” But he was clearly wrong about all of this, so he agreed to let the class wear pajamas and planned to hand in his resignation. Wendy said he didn’t have to resign, that people might actually respect him more if he publicly changed his mind (“Sometimes admitting that you’re wrong is the strongest thing you can do”), but he wouldn’t even entertain that thought.

Then PC Principal got an idea. An awful idea. PC Principal got a wonderful, awful idea. Completely throwing Mr. Mackey under the bus, he announced to the entire school that due to a scheduling error, it was actually Opposite Day. “Anything you’ve been told to do, you can now do the opposite,” he said, allowing the kids to wear their pajamas without him having to publicly admit he’d changed his mind.

Your thoughts on South Park‘s long-awaited return? Grade the premiere below, then drop a comment with your full review. (And remember: Don’t listen to Matt Damon unless you want to lose all your money.)