We all know the story of Tommy Lee and Pamela Anderson’s very-publicly leaked sex tape, but how much do you know about the man responsible? In Hulu’s new series Pam & Tommy (three episodes now available), you will learn all of the sordid details about the infamous crime heard (and seen) around the world.

In the first scene of the limited series, Pamela (Lily James) finds herself in Jay Leno’s hot seat. “What’s it like to have that kind of exposure?” Leno asks her on live TV. Of course he’s talking about the tape, which (unbeknownst to some at the time) was stolen from the couple’s home and released without their permission.

But hold up. Let’s rewind.

It’s 1995, and Rand Gauthier (Seth Rogan), the man behind the sleazy crime, is working a carpentry job at Tommy (Sebastian Stan) and Pamela’s home. His soundtrack while he works is filled with the sounds of the couple’s crazy loud sex. When they finish up, Rand gets extremely peeved when the rock star demands changes to the job plans mid-stream. (I mean, you gotta have a 360-degree view of the shower in your “futuristic, state-of-the-art love pad 2,000,” right?!)

Poor schlub Rand lives a sad life. There’s little food in his fridge and his cable’s been shut off since he’s past due. He can barely even afford the materials he needs to get the Lees’ job done, with Tommy constantly changing things on a whim. When yet another new request comes through for a water bed, Rand has the unfortunate task of breaking the news to the drummer. His boss Lonnie tells him to ask Tommy for the money, plus overages, up front, but when the contractors secure the requested bed, the money still hasn’t come through. Tommy then tells them their work is shoddy and he’s done. He fires them both and promptly kicks them out.

Rand wants to sue, but Lonnie says the legal fees would be more than what they’re owed. Rand believes that karma will eventually catch up with Tommy. (Oh, I guess you could say that…) 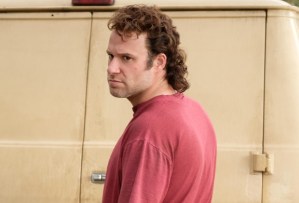 The next day, Rand goes back to the mansion to pick up his forgotten toolbox, but Tommy holds him at gunpoint and tells him to get the eff off his property. Rand runs back to his truck and realizes he wet himself, a reaction prompted by his childhood memories of his abusive father who frequently told him he’s a “worthless piece of s–t.”

“We’re gonna take that a–hole down a peg,” Rand tells Lonnie. “I am karma, and I’m a bitch.” Rand buys supplies and paints his van. He delivers Lonnie a notebook titled “Operation Karma.” He’s outlined paparazzi arrivals and departure times, along with Pam and Tommy’s sleep patterns. Dude has clearly done his homework! To circumvent the security cameras, they buy fabric that will make them look like the couple’s dog if they stay on all fours. However, Lonnie gets cold feet and bails, leaving the revenge plan solely to Rand.

And onward he goes, leaping over the couple’s fence at night draped in faux fur. He disables the camera and slips inside, gently walking past the sleeping pup. He snatches a huge safe which he wheels out on a hand truck, but as soon as he hits the driveway, the home’s bright outdoor lights flash on.

The next day, Rand opens the safe to find cash, jewelry, guns, a knife, watches and more. After buying some booze with the profits, he sells some of the goods to a pawn shop and pays some bills. It isn’t until later that he notices a Hi8 tape on his floor. The tape.

So what did you think about Pam & Tommy‘s premiere? Grade it below, then let us know in the Comments.