Batwoman’s Camrus Johnson, who plays Luke and is stepping behind the camera for this week’s episode, is issuing a fair warning for those who’ve been yearning for a romantic relationship between Sophie and Ryan.

“‘Wildmoore’ fans, drink a lot of water and sit down,” he teases. “Sit down and be prepared to hit me on Twitter very soon.”

“Broken Toys” airs tonight at 9/8c on The CW and will see Batwoman again at the risk of having her identity exposed just as some of Gotham’s most villainous unite. Meanwhile, Sophie teams with Luke for a mission, and Alice gets into Mary’s head.

Taking the helm of a show with costumed heroes and maniacal villains is a tall order, but Johnson felt up to the task after directing his NAACP Image Award-nominated animated short, She Dreams at Sunrise. (He made his directorial debut in 2019 with the animated short, Grab My Hand: A Letter to My Dad.) 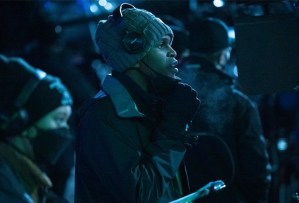 “I wasn’t sure about my confidence in directing before [She Dreams at Sunrise], and the fact that we made it and it’s been received so strongly… I showed up to the set of [Batwoman], and I was like, ‘Direct what? Let’s do it,'” the actor shares. “I was never truly scared or worried. Whenever there was a problem, we just fixed it. I have so many people to thank because I truly learned a lot about myself and what I can do as a director last year, and I feel very blessed to be able to do what I just did.”

Johnson also had the support of his CW cohorts, including Supergirl’s Chyler Leigh (“She was texting and checking in, [and] she also gave me some really beautiful ‘trust your gut’ advice”) and Arrow alum David Ramsey (“That’s my dawg… He gave me quite a bit of advice”), who directed an episode earlier this season and most recently appeared on screen as Diggle in the Jan. 19 episode, “Meet Your Maker.”

Johnson’s mentor and fellow director Carl Seaton (Chicago P.D., Batwoman, Snowfall) also offered up sage advice, telling him to take a few risks without rocking the boat too much.

“I think a lot of directors’ first mistakes when they get into it is trying to make everything new and different and weird,” he says. “You don’t have to do that. If you have a couple of moments that are just so you, then that is enough. You don’t have to go crazy and make it harder for yourself. I did just that, and it worked like a charm.”

As for Wednesday’s episode, fans can also expect a “really cool, transitional action sequence” as well as a “new guest star to freaking blow you away because her talent is crazy.”

Batwoman fans, are you properly hydrated? What do you hope to see in this week’s episode? Hit us up in the comments.