During The Resident‘s eight weeks off the air, perhaps you’d held out hope that Dr. Bell’s looming medical diagnosis would ultimately be something minor, or even, somehow, a red herring.

Yes, Bell’s increasingly frequent symptoms seemed serious. And Conrad looked gravely concerned upon getting those test results back in December’s fall finale. And executive producer Andrew Chapman confirmed to us that Bell’s mystery illness would be “a big deal” when the show returned. But when Conrad finally broke the news during Tuesday’s winter premiere, it was still quite the gut punch: Bell has multiple sclerosis.

During the episode, Bell’s first instinct was to leave Chastain for good, end his long medical career and part ways with Kit, who he refused to burden with a caretaking role. But with some love and encouragement from Kit, as well as ex-stepson Jake, Bell seemed at least slightly more ready to face his diagnosis and some new, frustrating symptoms.

Below, Chapman expands on how the show will handle Bell’s MS in Season 5 and teases the existential crisis that lies ahead for Devon as he leads his first clinical trial.

TVLINE | Let’s start with Bell’s diagnosis. How did you and the writers land on multiple sclerosis? Was there debate about that?
Yeah, there was a lot of debate about that. We talked extensively to our doctors. MS is a really complicated diagnosis, and it’s a variable one. What we learned — and I’m certainly no expert — is that some people can have MS and have hardly any symptoms, and for other people, it can be this incredibly debilitating disease. It gave us this interesting plot flexibility, but it also allowed us to do the thing that I think we do really well on The Resident, which is take up a community of people who suffer from a disease, like the way we did a bunch of episodes about diabetes, or episodes about maternal mortality. We take up a cause. Multiple sclerosis has a really tight-knit, very powerful community of people who suffer from it. They’re very engaged, they’re looking for a cure. We wanted something that could potentially be interesting in terms of clinical trials, because there’s all kinds of trials going on with multiple sclerosis right now. It was also something that Bruce Greenwood — our Dr. Bell — could get behind and really do the research on, and find out about the community of people who suffer from it. It was not an easy decision. It was a complicated, very thoughtful decision. 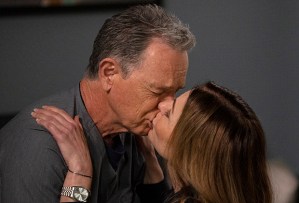 TVLINE | How would you say the disease presents for Bell in the weeks to come? And I ask that knowing that this is a TV show, and you have to lean into the drama.
In the next few episodes, he’s really just understanding what the diagnosis is, and how to deal with it. You’ll see, as we move forward, that he struggles to decide whether it’s overwhelming. Here’s the thrust of what we wanted: for him to have this crisis moment where it’s like, “Can I have this disease and still be the doctor I’ve always been? What do I become? How do I move forward in the world?” From the very beginning, we had this long, long arc of change for Bell. He was this guy who killed somebody in the series opener with an appendectomy, shouldn’t have killed him, covered it up. He was a flat-out bad guy, and he’s really redeemed himself. And now, here’s this medical crisis where he has to come to terms with what it means for him as a doctor. How do you live as a doctor with a chronic disease? And our show is rarely about the patients; it’s always about the doctors. And in this case, Bell is both patient and doctor. That is really powerful stuff for us, and really juicy storytelling, and it really dives into some core issues for doctors. Doctors get sick like the rest of us, and they have to navigate their sickness and their profession. That’s really what we’re going for.

TVLINE | On the logistical side, I have to ask: Is Bruce Greenwood staying with the show?
Yes. Absolutely.

TVLINE | I was encouraged to see Kit staying by Bell’s side in this episode, particularly in that emotional scene toward the end. Is it safe to assume we don’t have to worry about them as a couple?
Yeah, you don’t have to worry about them. They are a rock. They are so lovely together. Jane Leeves and Bruce Greenwood have such a wonderful affinity, in real life and on screen. One of the old truisms is that when you’re an actor, you can never hide your true personality. Your personality comes out on screen. And they just adore each other. They’re both perfectly happily married, and loving toward their own real-life spouses, but on set, they’re this wonderful, fun, teasing, adoring couple, and it just shows. Our audience loves them. It’s such a breath of fresh air to have this older, powerful couple that’s in love and always has each other’s backs. It’s charming. 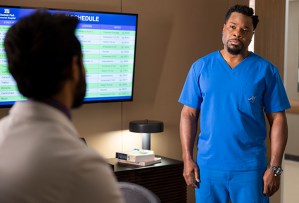 TVLINE | Turning to Devon’s clinical trial, I was surprised that Devon stood his ground and didn’t accept AJ’s mom. What can you say about how leading this trial might change Devon? He seems to have hardened a bit, even in just this hour.
It’s not that he’s hardened. It’s one of the core thematic ideas of the show — and he embodies it in this clinical trial — which is that, as a doctor, you try to save as many people as you possibly can. Conrad Hawkins breaks rules to save lives. But now, as a scientist, if you break rules, you ruin the science. That’s a really interesting thematic idea for us on the show, because it’s really interesting for the nation right now. The entire country living with COVID, the rules of COVID, the vaccines for COVID — we’re all grappling with, “What’s the science? What are the rules we break? How do we keep each other safe? How do we be compassionate?” This is a question almost without firm answers. But Devon, as a scientist and doctor, he embodies that conundrum.

I love that you asked that question, because to me, it’s just so central to both the show and what we’re going through as a nation. It’s all about that. So I wouldn’t say that he’s hardening. I don’t think that’s quite right. I think he’s grappling with how to save lives. He’s always been more of the rule-follower, and Conrad’s been more of the rule-breaker, but in real life, how does that work? I adore this whole episode, and I love this little bit of it.

TVLINE | And on AJ’s side of things, he has that a-ha moment when he learns his mom didn’t really want to participate in the trial. Will that moment stick with him, either as a son or as a doctor?
Absolutely. How do you treat somebody who you love desperately, when you’re a doctor and you could intervene to give them more life, maybe? But maybe your intervention is not giving them the life they want. This is something all of us — with our parents, our grandparents, and eventually ourselves — have to grapple with, and I just find it an amazingly powerful storyline. It’s going to go forward with Raptor, and he will have to grapple with, “I’m a doctor. My mother is dying. How do I deal with that? What are the avenues for making my time with her the best possible time?” It’s super powerful, and I think it will touch a nerve in a lot of people.

How did you feel about The Resident‘s return from hiatus? Did you correctly predict Bell’s diagnosis? Grade the episode in our poll below, then hit the comments with your full reactions!