Queen Latifah and Jada Pinkett Smith make a great duo — and the real-life friends and frequent collaborators are joining forces once again, this time on CBS’ The Equalizer.

Smith, who starred alongside Latifah in the blockbuster comedy Girls Trip, also worked with the rapper-turned-actress in the 1996 gangster girl hit Set It Off and the 2008 coming-of-age drama The Secret Life of Bees. (Smith didn’t star in the latter but was an executive producer on the film.)

For her guest turn on The Equalizer, Smith will play Jessie Cook, a brilliant and prolific thief with a photographic memory. The character is also described as amoral, devious and unpredictable. 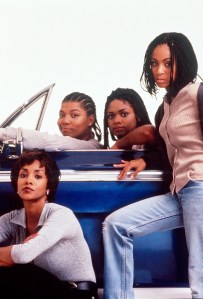 Latifah’s Robyn McCall and Jessie had worked on a mission together when the CIA recruited the burglar for her nefarious gifts. Because the pair were so different philosophically, however, they bumped heads and vowed to never work together again. Something must happen to bring the two back together, and Equalizer fans will enjoy the entertaining sparks and repartee that almost certainly will take place.

Smith and Latifah have previously enjoyed winking and nodding at fans regarding their beloved Set It Off roles as Stony and Cleo, as seen in this Girls Trip dance scene from the 2017 flick.

The Equalizer will return with new episodes on Sunday, Feb. 27 at 8/7c.

Are you excited to see Smith and Latifah reunite on The Equalizer? Drop your thoughts in the comments.