Believe it or not, Stephanie March has played an alien in the past. The Law & Order vet did the honors on an Adult Swim/Comedy Central series called Neon Joe, Werewolf Hunter for one season back in 2015.

She’s also happy to add that her new role as Akira, a metahuman on The CW’s comic-book drama Naomi, is nothing like her turn as Mayor Carol Blanton, in part because there’s so much mystery surrounding her.

“I can tell you she’s from another planet,” March reveals to TVLine. “She is hiding on Earth. Naomi sought her out looking for answers on that particular incident, and their relationship is loaded. In one scene, I was drinking coffee waiting for Naomi, and someone from the production crew informed me that aliens don’t drink caffeine. And I said, ‘Wait! I’m an alien? I thought I was metahuman? That’s the preferred term.'”

Terminology aside, March is just happy that Akira gives her the chance to play a character vastly different from most of her past roles as litigators. 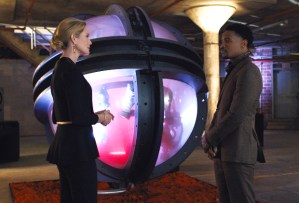 “Akira is not an attorney. I have played my fair share of those,” March explains with a laugh. “She did not go to law school. The possibilities are limitless when it comes to Akira, and that’s why I’m having so much fun. It was described to me as ‘Ripley-inspired, intergalactic badass.’ I knew I wanted a part of all of that, and to get to do it for [co-creator] Ava DuVernay has been wonderful. The scripts are so much fun. I would’ve been crazy to turn that down.”

Like Naomi, Akira has a complicated relationship with Zumbado, as fans saw in Tuesday’s installment. Akira made her debut in Episode 3 and returned in Episode 4, and as Season 1 unfolds, the intensity of her interactions with Zumbado and Naomi will continue to mount, especially now that fans know the trio is a part of the Original 29.

“The first scene I shot was with Cranston [Johnson], who plays Zumbado, and it was a dream,” March recalls. “Akira is not happy on Earth, and she has some strong opinions. I’m of an age where I love speaking my mind, and when Akira says she doesn’t like the food and the people, I loved every minute because I’ve wanted to say that about a few places. I channeled my inner grown-ass woman for that scene.”

What do you think of Akira so far, and are you excited about what comes next for her, Naomi and Zumbado? Drop your thoughts in the comments.