You would think after Hayden suffered a beatdown orchestrated by Fatima on Tyler Perry’s Sistas that he’d pack his bags and move far away.

But some people just don’t learn life’s lessons very easily, and as fans saw on the beloved BET drama’s latest trailer, Hayden not only returns to work, but decides to threaten Fatima in the process on this Wednesday’s installment (9/8c). Fatima warns Hayden to stop, or someone “will end up in a bodybag,” and then Hayden menacingly says that person will be the love of Zac’s life, Fatima.

Andi, per usual, attempts to de-escalate the confrontation, but you can tell the problem is far from over. Will Andi’s words of wisdom convince Fatima or Hayden to calm down and choose peace over violence? Does Andi the attorney have a few tricks in her blackmail bag to put Hayden in his place? Perhaps these exclusive photos will offer some much-desired insight and clarity on the subject. In one photo, Hayden gives Andi an open-mouthed and incredulous look.

In the other, Hayden’s grimaced anger is aimed at Fatima, who more than likely mocks him for waddling around on crutches. To be fair, Fatima’s coworker and past tormentor has every right to be frustrated. 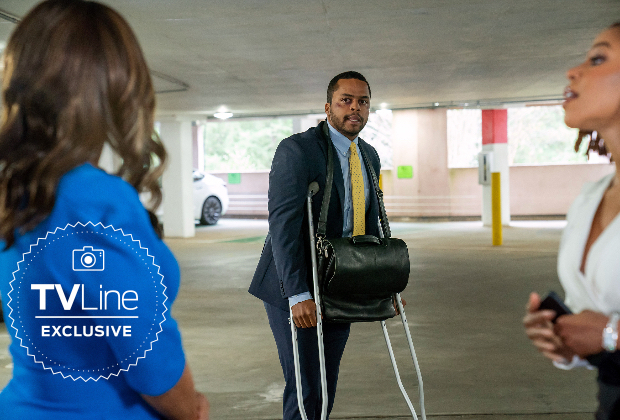 Still, given how Fatima got him to hit her and then used the punch as an excuse to have a couple of grimy goons physically attack Hayden and leave him naked and wounded on the hood of his car in the Season 3 finale, the low-level lawyer might want to leave Fatima and Zac alone for good.

What do you think Andi says to Hayden to get him to calm down? Do you think it will make a difference? Drop your thoughts and best guesses in the comments.