That striking resemblance between Lou Diamond Phillips‘ Joe Fabroa and his daughter, Grace, during Monday’s The Cleaning Lady? It wasn’t just some solid work done by the show’s casting department.

Rather, Grace was played in Episode 4 by Phillips’ real-life daughter, also named Grace. And though the pair has collaborated on a few past projects — namely the 2009 TV movie Love Takes Wing, which Phillips directed — Monday’s episode of the Fox drama served as their first time acting together, which Phillips says was “incredibly natural” for both of them.

“We have a long history of working the craft. She’s not only always been receptive, but she showed an aptitude for it early on,” the actor tells us. “It was just so wonderful. I had no doubt that we would have instant chemistry and a shorthand to work with.”

During the hour, Phillips appeared as Joe, a smarmy luxury car salesman who we learned was also the bone marrow donor that backed out of a transplant for Thony’s son, Luca. But near the end of the episode, Joe had a change of heart about the transplant and later reconnected with his own estranged child.

Phillips and his daughter only shared that one reconciliation scene, and it was an emotional moment — but that wasn’t the scene that gave Phillips anxiety. Rather, it was a sequence earlier in the episode, in which Grace has a terse conversation with Thony and Fiona; Phillips wasn’t in that scene himself, nor was he on set for it, which brought out the “protective stage dad” in him, he says. 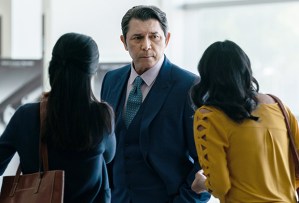 “It was the [worry that], oh my gosh, she’s going to be doing a scene with the leads of the show that I’m not in and I’m not around for,” Phillips remembers, adding with a laugh, “I’m like, ‘[speaking nervously] How’d it go, honey?!'”

Phillips’ guest role on The Cleaning Lady was born from a discussion about possibly directing one of the Season 1 episodes. He had previously helmed a Prodigal Son installment in 2021, “and it’s the same studio, same network, all of that good stuff,” he explains. But all of the season’s directing spots filled up before Phillips could claim one, leading the executive producers to offer him an “incredibly intriguing” guest spot in front of the camera instead.

“I found that to be a really lovely arc to traverse in an hour-long television show,” Phillips says of his character, who began the episode furious at Thony for tracking him down, but ultimately chose to donate his bone marrow to Luca after realizing his late wife used to sing the same lullaby to Grace that Thony was singing to Luca over the phone.

“It spoke to him personally. All of a sudden, it was a shared experience,” the actor continues. “This is something he obviously didn’t realize he had in common with Thony, and that cut straight to his heart. All of the cerebral arguments they made [for doing the transplant] had no effect. But that simple, shared experience spoke to him.”

Despite the bond that Thony and Joe forged throughout the episode, Phillips says there are currently no plans for his character to resurface in Season 1, though he’s “always open to entertaining possibilities.” And should the show return for Season 2, perhaps Phillips will get to sit in the director’s chair eventually: “At the very least, I would revisit this cast and crew in a different hat,” he says.