As SNL‘s Stefon might say, the new trailer for Paramount+’s live-action Halo TV series has everything — and what’s more, the video game adaptation now has a premiere date.

Based on the Xbox franchise, Halo will launch on Paramount+ in the U.S. (and in international markets where the streaming service is available) on Thursday, March 24, it has been announced.

Other cast on display in the trailer are Natascha McElhone (Californication) as Spartan II program creator Dr. Catherine Halsey, Yerin Ha (Reef Break) as Quan Ah (a young woman from the Outer Colonies who lived during the Human-Covenant War), Olive Gray (EastEnders) as UNSC Commander Miranda Keyes (daughter of Dr. Halsey) and Charlie Murphy (Peaky Blinders) as the original character of Makee (aka the icy blonde in a black, rubbery get-up).

You also get a first look at the A.I. Cortana, who will again be voiced the the video games’ own Jen Taylor.

Per the official logline, Paramount+’s Halo takes place in “the universe that first came to be in 2001 with the launch of Xbox’s first Halo game,” “Dramatizing an epic 26th-century conflict between humanity and an alien threat known as the Covenant.”

But as very recently detailed by game developer 343 Industries, the TV series is more specifically set in a “Silver Timeline” that is “independent” of, but “authentic” to, the video game world.

“To tell the best Halo stories we can, we want to protect the integrity, simplicity, and future of the core canon, but also not be limited by it when faced with the realities of a new medium and the process of production,” this 343 blog entry explains. “As a result, we made the decision to set the Halo television series in an authentic, but independent timeline.”

“The Silver Timeline is a unique vision of the Halo universe that contains and embraces many key elements of the core canon that has spanned the last two decades,” the explainer continues, “but with relevant contextual and narrative details that diverge in ways appropriate (and necessary) to the storytelling opportunities presented by the TV medium and our collaboration with creative partners.” 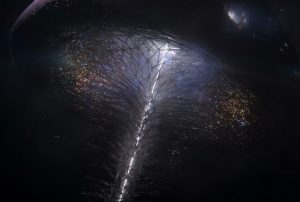 So, for example, the “coincidence” of Chief and Cortana simply stumbling across the eponymous Halo ring is gone, 343 notes. And High Charity, the Covenant’s capital city, is glimpsed in perhaps an unexpected state.

“To be clear,” 343 Industries states, “these will be two parallel, VERY similar, but ultimately separate timelines whose main events and characters will intersect and align throughout their very different cadences.”

Want scoop on TV’s Halo, or for any other show? Email InsideLine@tvline.com and your question may be answered via Matt’s Inside Line.