W. Kamau Bell is readying himself for Black Twitter’s response to his new Showtime docuseries We Need to Talk About Cosby.

The four-parter premieres this Sunday at 10/9c and allows Bell to unpack Cosby’s storied career from clean-cut comedian and I Spy star to America’s Dad. The series also takes a closer and very uncomfortable look at the breadcrumbs the one-time luminary and cultural pioneer dropped about his unsavory predilection for drugging and raping women. (Cosby was convicted of sexual assault in 2018 and released last year when the Pennsylvania Supreme Court overturned his conviction.)

“People have been tweeting that their timelines are going to be in shambles because of my docuseries,” Bell tells TVLine. “Once this comes out, I’m going to be hearing from all aspects of Black Twitter. I really didn’t make it to do that. But at the same time, there’s no way to do this series without that happening. I’m a person who wants to have difficult conversations and really come to new understandings.”

Bell, an Emmy winning-comedian who grew up as a part of the “Cosby Generation,” says he knew this subject had to be tackled and decided to be the one to do it, which wasn’t an easy choice, he adds. 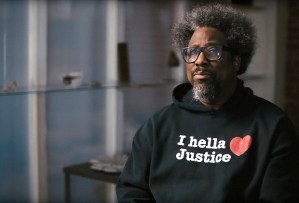 “I was compelled beyond any rational reason to do it, apparently because there are lots of rational reasons not to do it,” Bell explains. “I would go over them all the time, especially as a Black man being accused of taking down another Black man. But as people who are supporters of the survivors keep reminding me, he took himself down.

“Which is not easy to reckon with and when we started this, he was in prison,” Bell continues. “And it seemed like it was time for a conversation about this to figure out what we can learn from this totally confusing story. Then he got out of prison and the streets got hot again, which is where we are now.”

There is also an aspect of the Cosby tale that eclipses the fallen star, Bell surmises, which makes the docuseries ever prescient. 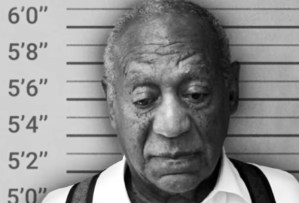 “I truly hope, no matter what you think about the allegations, and I believe the survivors,” Bell explains, “I truly hope that we can all agree this society does a bad job of taking people, specifically women, who are survivors of sexual assault seriously. This is why sexual assault and rape crimes are underreported and women are told not to tell anybody. The blame is put back on the victim. ‘What were you wearing?’ ‘What did you do?’ All of these things that are nonsense. We have to redo the structure in this country so sexual assault survivors feel invited to tell their stories.”

The entertainment industry needs an overhaul too, he says.

“Right now, as we’ve seen with Joss Whedon, it doesn’t even have to be criminal,” Bell observes. “He had A-list actors working with him, and they couldn’t do anything about his verbal abuse. This is bigger than Cosby, and it’s not always about crime. But as a Black man who grew up in the 1970s, Cosby is the most compelling way into the story and that’s where I am.”

Are you going to tune into We Need to Talk About Cosby? Do you think W. Kamau Bell should have made this series? Drop your thoughts in the comments.