Will How I Met Your Father avoid its predecessor’s biggest pitfall?

CBS’ How I Met Your Mother famously filmed a scene for its 2014 series finale eight years before it aired — specifically the scene where Ted and Tracy’s children confront their widowed father about his desire to date Aunt Robin again. Though the series had largely evolved beyond the Ted and Robin relationship, the Powers That Be stuck to their guns and went ahead with a twist they conceived before anyone had even considered that Robin was better suited for Barney than Teddy Westside.

Nearly eight years later, Hulu launched a sequel series centered on a new protagonist — Hilary Duff’s Sophie — and her search for happily ever after. But unlike the Mother-ship, the first episode of HIMYF makes abundantly clear that a few twists are baked into the DNA of the show, as not to upset the viewer later on. For starters, the dad is not necessarily Sophie’s One True Love. In flash forwards to the year 2045, an unwed Sophie is not romantically linked to her son’s father.

Beyond that, though, series creators Elizabeth Berger and Isaac Aptaker have made it a point not to think too far ahead. Heading into Season 1, “we were much more concerned with having people fall in love with our show,” Berger tells TVLine. As far as whether they have a six- or seven-season plan, or something even shorter in mind, Aptaker says that they “don’t have a strict number” at this point in time. “I think it depends on what a season of this show looks like [moving forward]. 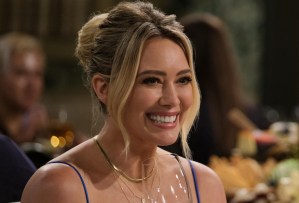 “It’s been really interesting, because we’re the first multi-cam that Hulu has ever made,” Aptaker points out. “We’re figuring out what an old-school sitcom looks like on [streaming], and in terms of season length [on broadcast], you usually do 22-24 episodes. We don’t need to do that, so we’re able to map out these really intricate, 10-episode puzzles.”

With that said, the EPs are open to slightly longer seasons in the future. “We did 10, which obviously is very normal in this model, but it also flies by,” Berger adds. “We did our 10 and went, ‘Oh my God, that was quick for multi-cam. We could have done a couple more,’ so I think we’ll take that into consideration.” 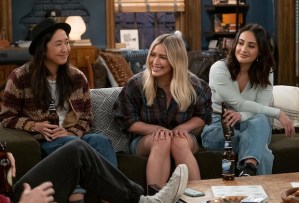 As Aptaker acknowledges, audiences are “accustomed to sitcom seasons being longer, and when they’re longer, you get more time for those episodes where the group is hanging out and having a wild night out. Those episodes don’t necessarily advance the plot in a huge way, but are sometimes the best episodes when it comes to these hangout shows,” he says. “Should this find an audience, and we’re really hopeful it does, that will be a larger conversation we have with Hulu — like, ‘What is the season length? And how many times a year are we doing seasons?'”

That, in turn, will dictate any potential endgame discussions — but those will begin only after the EPs have gotten the greenlight for Season 2. “Hopefully going forward, we can start mapping that out more specifically,” Berger says.

Should How I Met Your Father prove a success for Hulu, are you hopeful the streaming service will afford Aptaker and Berger the opportunity to plan ahead? Or do you want them kept on their toes, to avoid HIMYM‘s missteps? Drop your thoughts in a comment below.